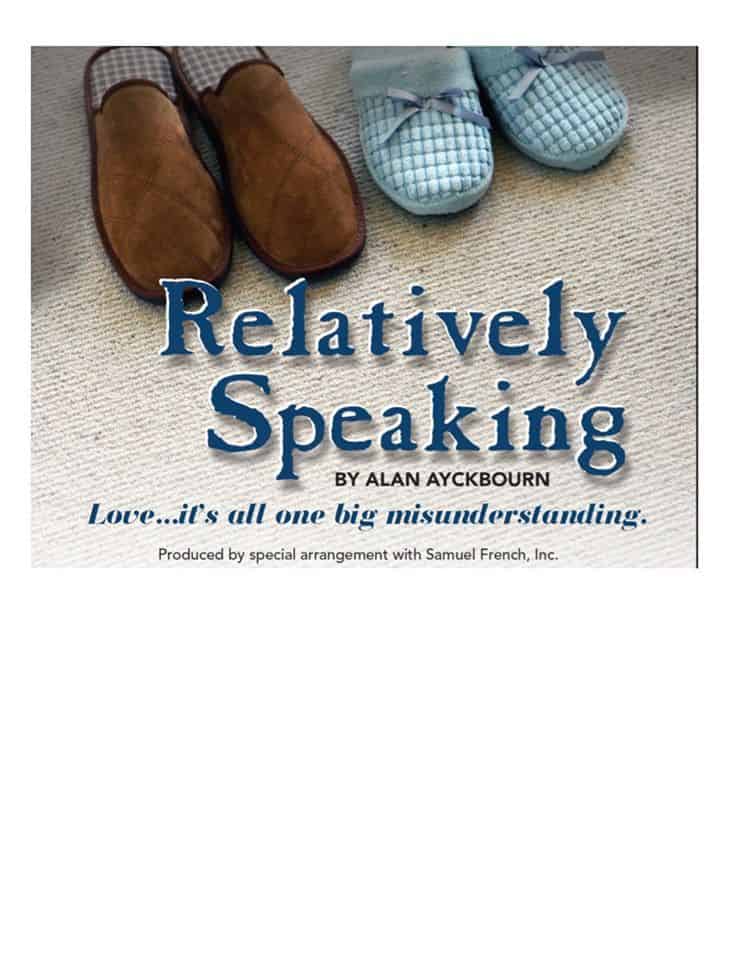 Quote of the Day: It’s all relative. Franz Joseph Kitzberger 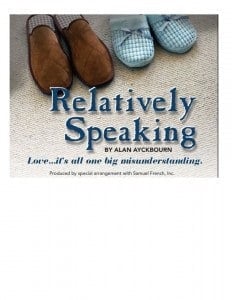 5. Hearing the audience make comments like “Oh, no.” and “Now what!”

6. Trying to remember who knows what about who’s sleeping with whom, and why these crazy kids just showed up at the door one summer afternoon.

7. The opening scene was in a London flat. The rest of the play was set in an English countryside.

8. The real flowers in the three six-foot flower boxes that lined the parameter of the stage, donated by the horticulture department at CLC. They were beautiful and made me think of summer. I wanted to reach out and touch them.

9. The show was well cast, and all the actors were excellent. Believable British accents, to me, anyway.

10. I could enjoy a wonderful evening of theatre, put on by my local college and community, by friends and neighbors, and I didn’t have a two hour drive when it was over.

Relatively Speaking is playing at Central Lakes College (CLC) community theatre. The play opened on Feb. 25, with night performances Feb. 25-27 and March 3-5, and an additional 2 p.m. matinee March 5 on the Central Lakes College Dryden Theatre stage. You can read more about the play in an article in the Brainerd Dispatch. (excerpt and show details below.)

The production is directed by Erik Steen. His previous stints at Brainerd Community Theatre have included “The Mousetrap,” “I Hate Hamlet” and “The Diary of Anne Frank.” Steen has directed “Mornings at Seven,” “How the Other Half Loves,” “Arsenic and Old Lace” and “Born Yesterday” for Pequot Lakes Community Theatre.

The cast of “Relatively Speaking” is a mix of newcomers to the BCT as well as a couple of veteran performers. Playing the role of Ginny is Laura Burgess, who makes her debut with BCT in this role. Nicholas Kory plays Greg. Kory has been seen in numerous BCT productions, most recently as the title character in “The Servant of Two Masters.”

Real-life married couple Dan and Virginia Rohr play the roles of Philip and Sheila. Dan has been seen on the BCT stage in “Art” and has also appeared in several Pequot Lakes productions. Virginia makes her BCT debut in this show. Both also are members of the vocal group Consensus, which will be performing as part of the Cultural Arts Series in mid-March.

The set is designed by George Marsolek, who is the new technical director for BCT. Dawn Marks is the costume designer; Ben Kent designs lights and sound; and Bob Spear is production stage manager.

Tickets are available online at www.clcmn.edu/arts or from the CLC Box Office at 218-855-8199. This production is sponsored by the CLC Videography program. The BCT season is made possible, in part, by an Operating Support Grant from the Minnesota State Arts Board, thanks to a legislative appropriation from the arts and cultural heritage fund.

Journaling Prompt: Have you ever tried to pretend you were someone who you aren’t, related to someone you don’t really even know, or make up an elaborate lie?

Review of Cinderella at The Children’s Theatre Company in Minneapolis

Open a Box of Quaker Oats