Quote of the Day: Autumn seemed to arrive suddenly that year. The morning of the first September was crisp and golden as an apple. ― J.K. Rowling, Harry Potter and the Deathly Hallows

I’m teaching theatre classes for kids again this fall at Central Lakes College (CLC) in Brainerd. I have students from various schools and small towns in our area, including kids who are home-schooled. From the first day of class, they were united. I’ve never seen it happen so fast before. In my workshops, I give them a setting and a very loose outline of what our play will be. It is up to them, as a group, to develop a story line. The first thing they do is think about what character they could be in this setting. This time, I had them get in small groups to work on plot. The title of our play is A Funny Thing Happened on the Way Home from School. In the elementary class, they’re just letting out of regular school. Millie Cottonpoly (my character that started out as a puppet) has been a guest teacher, talking to the kids about dogs, of course (she’s a dog whisperer and trainer), training, safety, and the benefits of having a dog as a pet. The kids get on a bus, driven by Willie Cottonpoly (retired railroad worker) who sets the scene by calling out, “All Aboard the Reading Railroad!” The kids talk about books they like to read, and bump along, until the bus/train breaks down. That’s when all the “funny” things start happening. They have terrific imaginations! 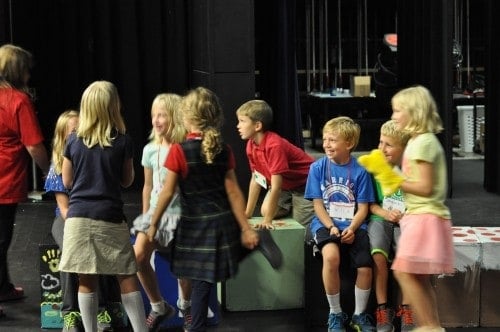 Last Wednesday afternoon, I got a call from Patrick Spradlin, theatre director at CLC, who said, “Lakeland Public Television wants to do a story on your program. Tomorrow.” Oh, well, ok. It will be our second class, certainly not reading for any filming. But, I said, “Yes, have them come to the elementary class.” If nothing else, we’ll impress them with our charm and cute factor. I had the reporter, Logan, interview the kids for the “Golden Apples” segment of Lakeland News. She filmed some of the class, my interactions with them, and gave each child a chance to talk to her into the microphone and see themselves in the little viewfinder on her TV camera. She interviewed me between classes and stuck around to meet the middle school class as well. She filmed them standing behind her for the “teaser.” You won’t see that on the news clip that I post below, but she does have some footage of them as they’re arriving at class. 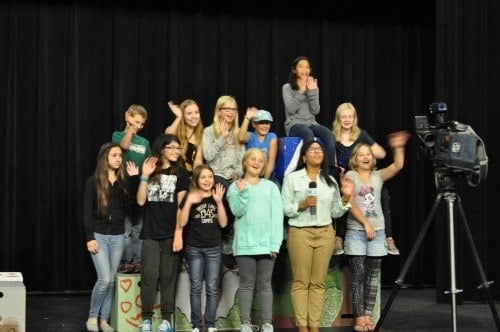 What a cool experience for these kids. Note their confidence. Note their enthusiasm. They are developing a fun story – TOGETHER. It is an amazing exercise in cooperation and relationship building. And, here’s the biggest news of all. In the middle school class, I have 13 girls and one boy. They were a united team from the start. They’re working together, developing their characters, helping each other develop characters, talking about classroom cliques and middle school mayhem. Their fictional school is Mystical Middle School. (Can you guess what their characters might be like?) My hope is that we are able to pull off their theatrics in our limited amount of time and with limited amount of resources. Watch the clip if you have time. It’s about three minutes long. Logan must have gone right back to the studio and started editing. She did a fantastic job. Love her lead-in line! I’m so proud of all the kids who stepped right up to the microphone and shared their thoughts.

Journaling Prompt:  Have you ever been on TV? 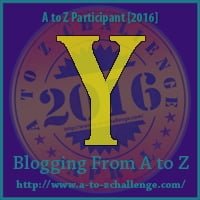 Y is for Youth Theatre