The Guthrie’s Music Man has Heart

Quote of the day: photo and quote from the Guthrie Theater Facebook page. (photo by T. Charles Erickson. Harold Hill played by Danny Binstock, a terrific actor, he really made us believe he went from Shyster to Sweetheart.) 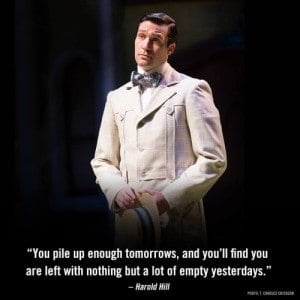 It didn’t work out for me to attend press night for the Guthrie Theater’s production of The Music Man, so this is an unofficial review. I wanted to bring my boys, who had an exceptionally busy summer, and it worked best for us to go near the end of its run. Ever since I saw my “little” sister play Marian the Librarian in a AAAA community theatre production of this show, it became my favorite musical. There’s something about the setting, Midwestern Iowa small town, and it’s residents, much like my own community in Minnesota, and the music that sets my toes-a-tapping, that makes this show irresistible. In the end, it’s a story of redemption as Harold Hill finally gets his “foot caught in the door.” He sees the heart of the people and not just their pocketbooks. Marian, who’s been cool and independent, ready to find the flaw in any man, sees the good in a con-artist who somehow reaches in and transforms the lives of her brother, and other town’s folks. He inadvertently does what he lies about being able to do, change the community through music, and that warms this piano teacher’s heart. 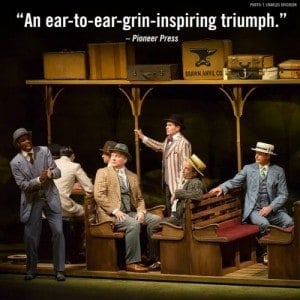 The Music Man has the best opening number of any musical, with the traveling salesmen bouncing and chanting along, making the sounds of the train with their lyrics and claiming, “You gotta know the territory.” Many people, including myself, were bobbing along with them. So many of the songs in this musical are full of rhythm and fun. My second favorite song is the rowdy library romp, Marian the Librarian. The choreography needed to pull off this number is amazing, from the stamping of the library cards, to the slamming of the books, it marches along. I could barely sit still! And, of course, no one can resist tapping at least a pinky finger during 76 Trombones. But, it was little Gracie Shin (played by the adorable Caitlyn Carroll) who first brought the tears to my eyes when she started out on “O-ho, the Wells Fargo Wagon is a comin’ down the street, Oh, please let it be for me.” Oh, and I felt that anticipation, the excitement, the longing for something wonderful “just for me,” and when Winthrop (played by Seth Beil) sings his solo, not giving a hoot about his lisp, I just lost it. Music gives hope and confidence like nothing else. It even offers forgiveness, and promise for what can be if we just let down our guard, pick up an instrument (including our voices), and join in the song. 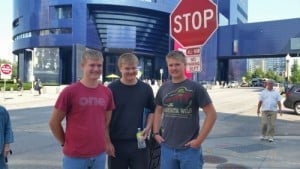 Okay, and maybe the tears were for me as I sat with my three big boys. One wasn’t there because he’s already left the nest and is busy building his own life. I just scheduled senior pictures for the next one, and the twins are already sophomores. Sigh. All those grandma’s were right, they really do grow up too fast.

After the show, we drove (surprisingly smoothly considering traffic and road construction) back home, via St. Cloud and Chicago pizza. Yum. I 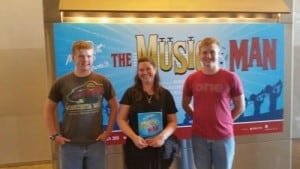 was feeling grateful for inspiring productions like The Guthrie’s The Music Man which gave me a good excuse to have one more summer outing with my boys. I was feeling grateful for our health and happiness, and the hopes of what the future has in store for them. They all said they liked the show. The music was great, of course, and all the actors were so smooth. They had energy and heart. Even as the show is winding down, they give it their all, with a freshness and comfort, like driving on an old familiar road. The run ends August 30, extended because of the popularity of the show. The performance we attended was full, maybe not quite sold out, but close! It must be just what audiences were craving this summer, a familiar story with a favorite musical score, and outstanding actors to bring it to life.

The Music Man, by Meredith Willson, first produced in 1957, is playing at the Guthrie Theater in Minneapolis, MN through August 30, 2015. Directed by John Miller-Stephany, Music Director and keyboardist Andrew Cooke, Choreographer Joe Chvala, and many more on the production crew and stage. See The Guthrie Theater website for a complete list and for show times and tickets. One final word after watching this production: Bring back Barber Shop Quartets! 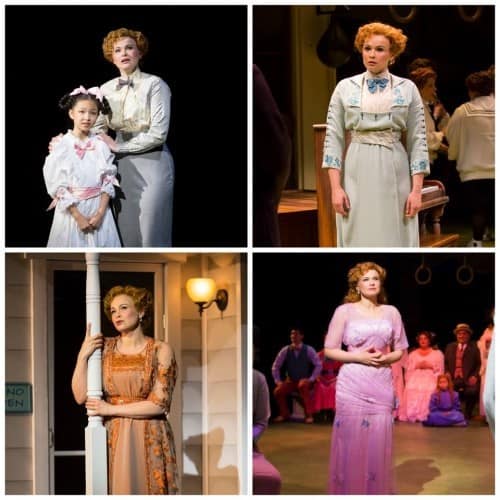 Marian the Librarian, played by Stacia Bono. The boys and I agreed, she has the best voice out of all the cast. Absolutely stunning. Those high notes are breath-taking, and the emotions she put behind them, heartfelt. Photo by T. Charles Erickson. Her costumes (by Mathew J. LeFebvre) were lovely.

Journaling Prompt: Do you, or did you, play a musical instrument, or sing? If not, what would you like to play? 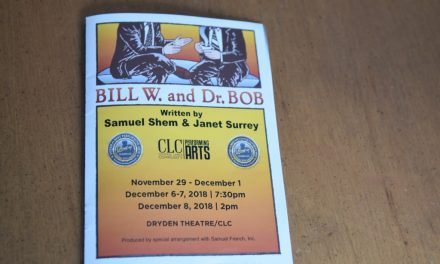 Review of Bill W. and Dr. Bob, a play about AA, BCT at CLC