An Outing to watch Inside Out

Quote of the Day: from the Disney Pixar movie, Inside Out 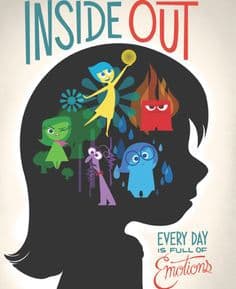 Joy: Do you ever look at someone and wonder, “What is going on inside their head?” Well, I know. Okay, I know Riley’s head.

Joy: Come on, group hug! You too, Anger.

I really wanted to see this movie, but I don’t have any little kids at home, and my big kids were away having their own adventures. So, what’s an old mom with a kid’s heart supposed to do? I called up my friend Krista and asked if I could borrow her girls for the afternoon and take them to a movie. (I usually bring them with me to the Children’s Theatre in Minneapolis, for live performances.) They had already seen Inside Out, but wanted to go again with “Auntie Mary.” Then, Krista called back and said, “Oh, and do you mind taking their friend Lucy along?” No, the more the merrier. “And, the girls were talking about it, and Lucy’s older brother Sean wants to go, too.” Okay, so I loaded up the movie bus (i.e. my Subaru, named Scarlet) and headed to the nice, cool movie theater. The girls couldn’t stop talking about their favorite parts on the ride over. I tried to la, la, la it so I wouldn’t hear and spoilers, but that’s harder to do when you can’t cover your ears because you’re driving, four young children, and none of them are your own. The girls brought money. I helped them get tickets, and we shared snacks. Sean had money for himself and his sister. He was all grown up about it, too, figuring out just how much they could spend on snacks. 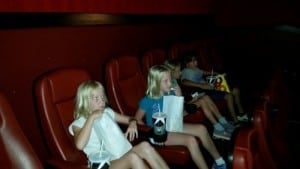 They were great theater-mates. They told me one of the best parts was the short at the beginning, Lava Love, very cute. We all sat riveted to the screen. I heard giggles from them, to accompany my own outbursts of laughter, especially at the parents’ head voices, the puberty freak-out, and sarcasm from pre-teen Riley. One of the reasons I wanted to see this movie, in the theaters, was because my dear friends moved away from Minnesota last year, and relocated in California. The mom said, “It’s our story, and I cried through the whole thing. It’s like they were following us around all of last year. They even used some of the same lines.” As I watched, I understood. You Southerns might think it strange that anyone would miss the ice and snow of Minnesota, but some do. There are things you can do in our frozen winters that you can’t do in the warmer climates. But, more than anything, you miss the people you love. You miss the comforts of home. You miss the familiarity, and you hate being the “new kid.” In the movie Inside Out, emotions and memories are stored in large marbles and colored to match an emotion. Joy is pink, and she’s proud to point out that most of the core emotions in Riley’s head are pink. But, then she notices that Sadness is getting into the marbles. She’s turning some of them blue. I was thinking about that, as Riley misses her old life and her old friends. Even our best memories that were once filled with pink Joy can turn blue. (sigh) This is a clever movie about getting inside someone’s head, what we feel and think in there, and how hard we try to keep it all pink, when really what we’re feeling is blue. Oh, Anger’s red, Envy’s green, and Fear’s purple all play roles, but as any psychologist would tell you, they are secondary emotions (in this case, characters), and we need to feel all of them in their own right.

Inside Out is a movie I could watch again because of clever characters, the imagery, and use of imagination by the creators and for the audience. I really felt like I was inside Riley’s head. I wondered what color my own memory marbles would be. In a couple scenes, it looks like they might be losing some of the marbles, some are turning different colors, and some of the core memories are changing. Life can be like that. 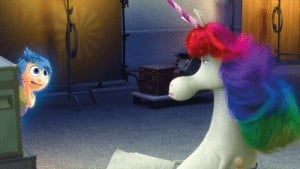 Here’s one more image from the movie, for the girls who gave me a “Rainbow Unicorn Kitty” card for my birthday last year, which, by the way, is a joyful Pink memory.

Journaling Prompt: What memories do you have from childhood? What color are they? Did you ever have to move?