Quote of the Day: When I kissed you did it feel like an actor kissing an actor, or a person kissing a person? The character simply named “She” in Sarah Ruhl’s comedy Stage Kiss playing at The Guthrie Theater in Minneapolis, MN, July 18 – August 30, 2015. Take a look at the photo below. What do you think? Is it real, or are they faking it? And, maybe that is the question that begs answering throughout the show, and in real life. What character are you playing today? 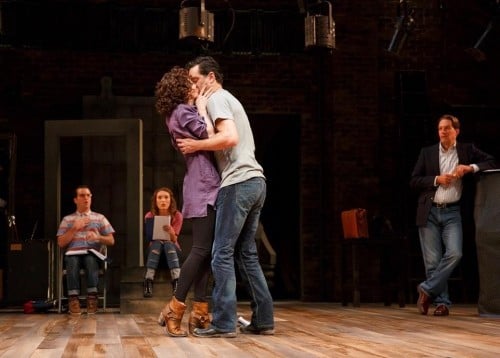 On the surface, Sarah Ruhl’s Stage Kiss, is a light, romantic comedy. A play that pokes fun at anyone who has ever been in the acting/theatre business. My sister Joy and I saw this show together, and we spent some time on our ride home comparing it to Michael Frayn’s Noises Off, a play we acted in together, several years ago in a AAAA community theatre production in Alexandria, MN. It’s a fun romp through the ins and outs of theatre life, on and off, the stage! As is the case of Stage Kiss. In the first act, two people, who are simply named “He” and “She,” are reunited onstage after a 20 year separation. They had once been lovers. The intimacy of performing together, night after night, on stage, rekindles the passion they felt for each other. The problem is “She” is married to someone else and has a teenage daughter. “He” is in a relationship with a school teacher from the Midwest. The Husband accuses her of falling in love with every leading many she’s ever been with on stage. Hmm. Sound like anything you might have heard out of Hollywood? In the first act, they are performing a play set in the 1930’s with all the gorgeous costuming, music, and set pieces. It is lovely and romantic. Everything is like one big, long honeymoon. 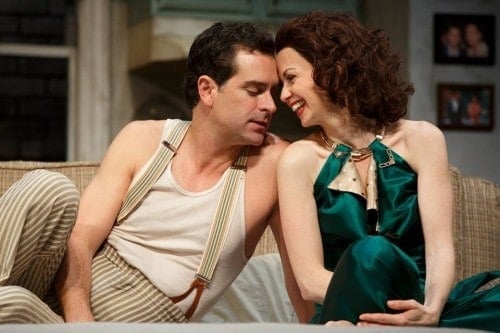 Todd Gearhart (He) and Stacia Rice (She) in the Guthrie Theater’s production of STAGE KISS, by Sarah Ruhl, directed by Casey Stangl with set design by Todd Rosenthal, costume design by Devon Painter and lighting design by Tom Mays. July 18 – August 30, 2015 on the McGuire Proscenium Stage at the Guthrie Theater, Minneapolis. Photo by Joan Marcus.

“The second act definitely has a different feel,” were the first words my sister said as we exited the show. This time, He and She are playing much darker characters. She is a whore, and He is a violent member of the Irish Republican Army. They rehearse a fight scene where He beats her up. The costuming in this act is over-the-top, both humorous and jarring. Considering that the playwright Sarah Ruhl is a two time finalist for the Pulitzer Prize, I believe she was very intentional in changing the mood. While we might be laughing, some of us at least, are cringing just a little at what is happening onstage. How far will any of us go for our art, our love, and our sense of self? What have we lost or compromised in the process? (The Guthrie did not provide any production photos from the second act. You’ll have to go to the show and see it for yourself.) 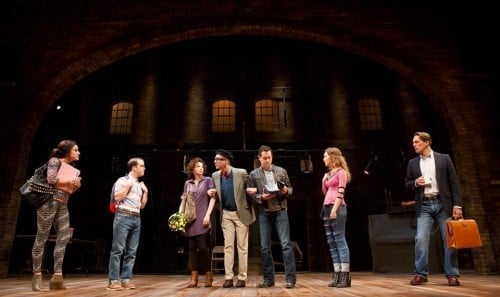 I enjoyed the set, which looks like a street and the inside of a theatre in NYC, or as I whispered to my sister as we sat down, “It reminds me of West Side Story.” (No photography is allowed inside the theater, not even when you are just taking your seats.)

Stage Kiss is playing at the Guthrie Theater McGuire Proscenium Stage now through August 30, 2015. On their Wurtele Thrust stage, you can see The Music Man. It didn’t work out for me to attend press night for The Music Man, so I don’t have a review for you. However, I will be attending it with my three teenage boys in August, towards the end of its run (which has extended to August 30). Will it still have it’s freshness? Will I still think it’s my favorite 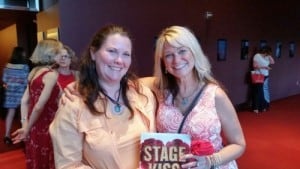 musical? I’ll let you know in August! If you’d like to read a review of The Music Man, visit my friend Tracy’s blog. We met as online reviewers and connected in person, found we had much in common, and are now friends. We even hug and take fun intermission photos when we’re reviewing the same performance! Also, check out her podcast Eat This, Twin Cities, that she does with her husband Terry Daniels, for reviews and commentary about everything from restaurants, theater productions, the Minnesota Twins, and more!

Journaling Prompt:  Why do you think the playwright Sarah Ruhl chose not to name her two main characters?

We want to see art.

G is for George and Globe