Quote of the Day: No home is sacred from violence. No part of the nation is free from race clashes, and indeed the fair name of our country is soiled throughout the civilized world because of it. Ida B. Wells (activist in the 1800’s against lynchings) in the play The Gospel of Lovingkindness written by Marcus Gardley, directed by Marion McClinton, and playing at The Pillsbury House Theatre in Minneapolis, May 29-June 28, 2015. 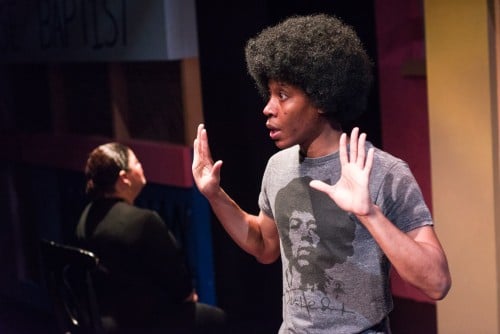 Namir Smallwood as Manny and Thomasina Petrus as Mary in The Gospel of Lovingkindness at Pillsbury House Theatre.
Photo by Rich Ryan

The Gospel of Lovingkindess reflects on life, mothers and sons, a cry to end violence, and above all hope. Manny is a gifted musician, has a plan, and high hopes for his future. His mama, Mary, is so proud of him. Noel is struggling to figure out what his purpose is in this world, where he fits in, and how he’ll survive. They meet on a terrible day when Noel feels desperate to prove himself, and all Manny wants to do is look good in a new pair of shoes and go about his business. The play moves forwards and backwards in time as we get to know these boys and their mothers, the place where they live, and how the world looks to them. A visit from the ghost of Ida B. Well, an activist from the 1800’s who protested against lynchings, lights a fire under Mary. Her grief is deep and unending, but she realizes she can make good out of something terrible. Mary says, “No neighborhood is safe. It’s just a matter of time until violence comes to your home, too.” In a scene between her, a congressman, and a radio interviewer, she challenges the congressman to do something, take action, and stop thinking it happens “somewhere else.” What happens in one neighborhood happens to all of us. 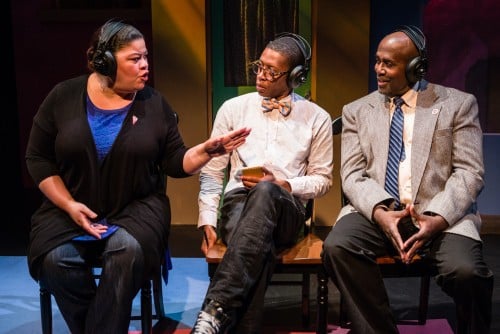 Mary (Thomasina Petrus) tells the congressman (Jams A. Williams) to do something to end the violence, as the interviewer (Namir Smallwood) looks on.
Photo by Rich Ryan

I watched this play with my 17-year-old son. It was the second show we saw on our mother-son date. The first one was Juno and the Paycock at the Guthrie Theater. It is about a poor family in Ireland in the 1920’s who are struggling to survive during the Irish Civil War. The mother’s cry to end violence was also loud and clear in this play. “What good is going through the pains of childbirth to bring my son into the world only to carry him to an early grave?” Oh, the keening of mothers in neighborhoods across the globe throughout the ages. When will it end? What do we need to do? 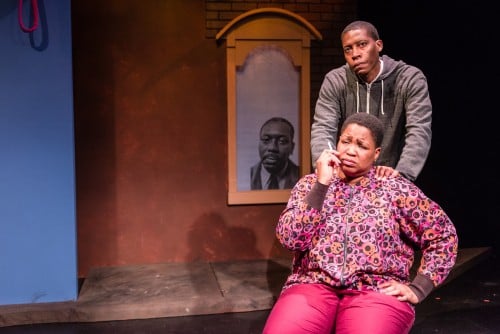 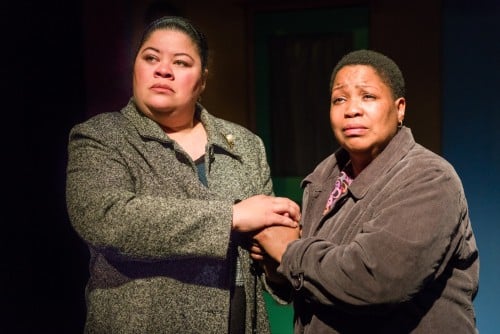 Mary (Thomasina Petrus) and Noel’s mother (Aimee K. Bryant) united in pain and fear for the future, as they hold each other up and believe in a better tomorrow.
Photo by Rich Ryan

Playwright Marcus Gardley is speaking to the current generation of people living in a violent and broken world. The characters mention the bloody scene at the movie theater shooting in Aurora, CO and the massacre of school children at Sandy Hook Elementary School in Newtown, CT. None of us are immune to the violence of this world. We need to somehow instill hope in every child that they can live a better life, that they’ll have shelter and enough food for themselves and their families. They need to know that the education they’re receiving will get them through the doors of success and fulfillment in life. We need to spend more time lifting each other up rather than putting each other down. And, above all, we need to build a community of trust. That is the hope for the future. That is what will keep mothers from weeping at the graves of their children instead of singing songs of praise at the birth of their grandchildren. 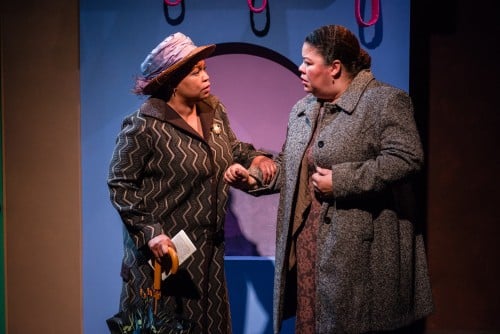 The ghost of Ida B. Wells (Aimee K. Bryant) telling Mary (Thomasina Petrus) that she can make a difference. Photo by Rich Ryan

Some people are afraid of watching dramas because they don’t want to think about the pain and violence of this world. The Gospel of Lovingkindness shows you the terrible outcome of such violence, but it also shows you what love looks like. It’s hope mixed with laughter. It’s rising above the pain and taking action to help others. Hope, it’s what we feel when we look into the eyes of our children. Tomorrow can be a better day.

The Gospel of Lovingkindness is playing at the Pillsbury House Theatre in Minneapolis, May 29 – June 29, 2015.

Journaling Prompt: What gives you hope?

Open to a Musical