The Odd Couple at Stage North in Brainerd, MN

Quote of the Day:  I can’t take it anymore, Felix, I’m cracking up. Everything you do irritates me. And when you’re not here, the things I know you’re gonna do when you come in irritate me. You leave me little notes on my pillow. Told you 158 times I can’t stand little notes on my pillow. “We’re all out of cornflakes. F.U.” Took me three hours to figure out F.U. was Felix Ungar. Oscar Madison from Neil Simon’s classic comedy The Odd Couple. 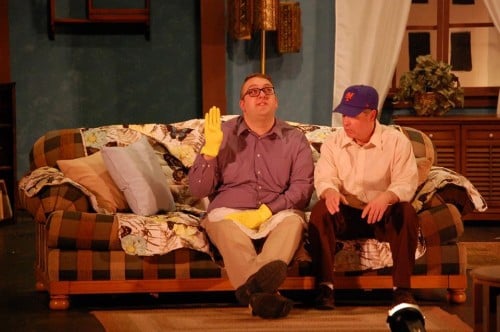 The Odd Couple at Stage North in Brainerd, MN
Travis Chaput as Felix, and Brad Wagendorf as Oscar Madison

Most of you know the plot line, probably saw the old movie, the stage play, or even the television series starring Jack Klugman and Tony Randall. As soon as they played the music from the television show, I was picturing the opening segment. It ran from 1970-1975, so I probably know it from reruns. It’s a classic comedy, perfect set-up with foil characters thrust into a relationship. Oscar, the slob, takes in Felix, the neat freak, where humor and angst ensue. Our Travis Chaput nailed the part of Felix! He had the mannerisms, line delivery, and facial expression that made his character very real and fun to watch. Oscar, played by Brad Wagendorf, has the “I don’t care – leave me alone” part down. He’s not the curmudgeon with charm that Jack Klugman has perfected, but he carries the part on his own merit. I felt like he had to change the most through the show. I brought my son Zach, a junior in high school, and he chuckled throughout the show. He’s young enough to have never even heard of The Odd Couple! He thought the cast did a great job with the script. I said it seems like it might have been one of the first shows to deal with divorce in a humorous way. What made the television series funny, and long standing, was the dynamic between these opposite personalities. Although they irritate the heck out of each other, they have a male bond that keeps them together. Zach said he was very satisfied with how the stage play ends. So, cool. This classic comedy clearly has lasting power to entertain throughout the ages. The guys did a great job. The women had the best costumes, but I’ve never cared for their part. It’s as if Neil Simon found women irritating at this stage in his life and makes them into dumb broads. Has anyone seen the female version of this play? 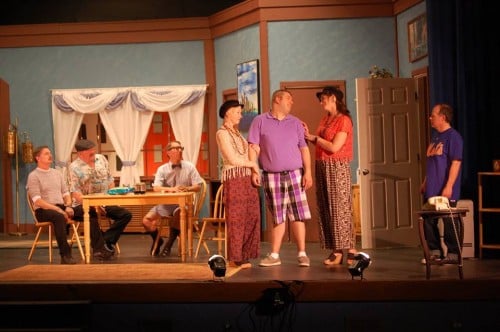 If you’re in the Brainerd lakes area this weekend, go to the show! It’s a delightful couple hours of entertainment. Maybe you’ll trip down memory lane a bit as you remember the classic movie, stage, and/or television series. Bring a younger person along! They need to know where all the great theatrical plays came from.

Journaling Prompt: Are you more like Oscar or Felix? Which versions of this play have you seen? Would you ever move in with a friend after a major life change? How would that go?