Review of The Color Purple at Park Square Theatre in St. Paul, MN

Quote of the Day:  I am an expression of the divine, just like a peach is, just like a fish is. I have a right to be this way…I can’t apologize for that, nor can I change it, nor do I want to…We will never have to be other than who we are in order to be successful. We realize that we are as ourselves unlimited and our experiences valid. It is for the rest of the world to recognize this, if they choose. 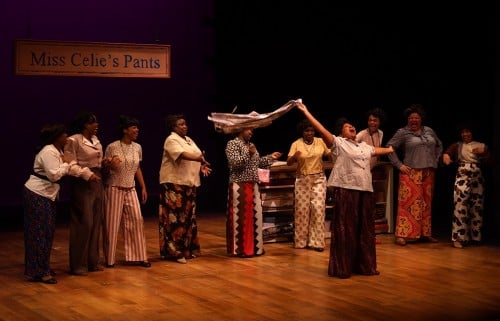 The novel The Color Purple by Alice Walker has been adapted for the stage as a musical by Brenda Russell, Allee Willis, and Stephen Bray, book by Marsha Norman. It first appeared on Broadway in 2005. You can now see it performed live at the Park Square Theatre in St. Paul, MN through Feb.15, 2015. The book itself is one that sticks with you, the characters, the story, the images and descriptions. It changed the way I saw the world, including God, men, women, history, who we are and where we came from, and how to persevere. With the addition of music, dance, and superb acting, this show is sure to awaken something inside of you, too. 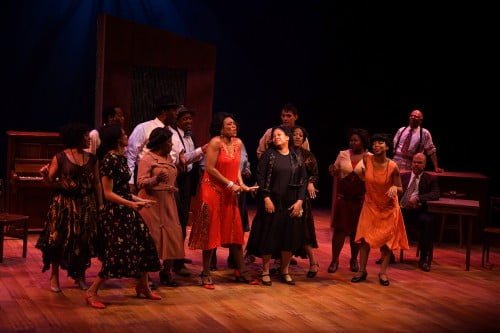 Aimee K. Bryant who plays the main character Celie must explore an enormous range of emotions, and age, for this role. The story plays out through the life of Celie, from age 14, when she’s giving birth to her second child, to her mature years where she has finally found her own voice and beauty. Wow. Aimee K. Bryant was so convincing, I forgot she was an actor. I believed every emotion, every word. I ached for her and cringed as the abuses were heaped on her. I cheered when she found someone to admire, and my heart soared when she stood right in front of me and sang out, “I’m beautiful, and I’m here.” 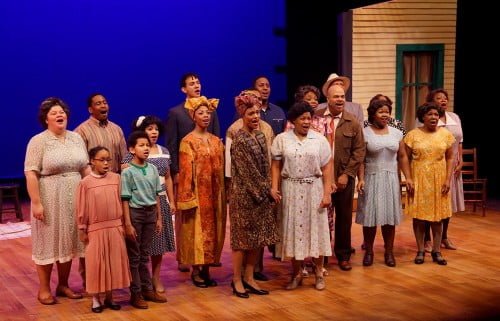 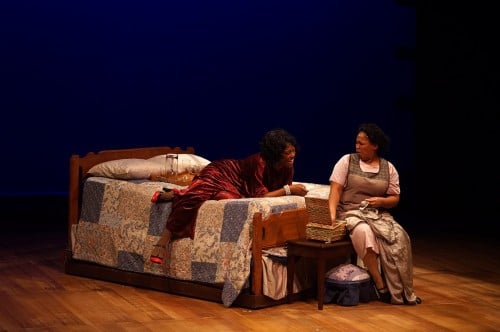 The Color Purple is the show to see this season in the twin cities. If you have only a few spare evenings or dollars, use them to see The Color Purple. If you have more time and money, buy tickets for all your family and friends, and go to the show as many times as you can before it closes on Feb. 15, 2015. This is a heavy story. I remember reading the book and feeling such strong emotions: fear, worry, anger, love, redemption, the power of forgiveness. I dreaded reading more about the abuses. I was a little apprehensive about how they might portray all of this on the stage. The cast and crew of The Color Purple handled this difficult subject matter remarkably well. We knew just enough about the abuses to understand the fear and emotions and the story line. They included humor, music, and both lovable and hateful characters. “The Church Ladies” are a hoot, and their songs are delicious.You root for Celie from the opening scene. The music and dancing are marvelous. I would go again just to experience that. I was hoping that they’d be selling the CD on my way out the door. 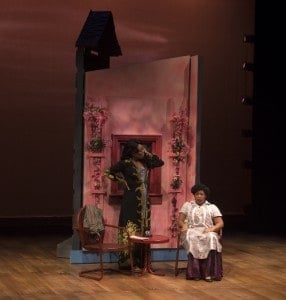 Experiencing a story like The Color Purple changes how you view the world, what you will accept, and what you won’t. You see things in a new light, and perhaps it comes in shades of purple. You begin to realize that despite the ugliness of the world, and the darkness in men’s hearts, there is beauty all around us.

Everyone of the cast members did an outstanding job. I was particularly drawn to Aimee K. Bryant, of course, as Celie, and Regina Marie Williams as Shug Avery, who reminded me a little of Whitney Houston, especially in the bathtub scene. Thomasina Petrus plays a spectacular Sofia. Celie, and we, learn to be a strong woman from her words and actions. I think every girl should learn the song, “Hell No!” Mmm hmmn. I even gave a little shout out after that number (and, I’m from stoic Norwegian heritage). Oh, ya, I was tappin’ my toes, hummin’ quietly, and wantin’ to practice my shimmy as I watched this performance! 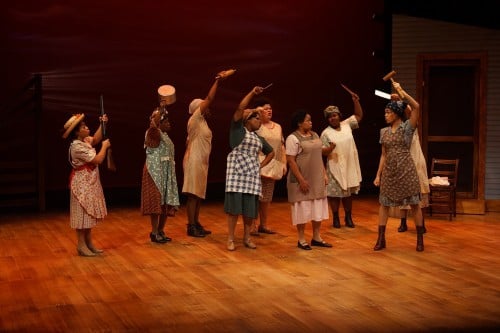 Thomasina Petrus, Sofia, leading the women in a heart pounding chorus of “Hell No!” during Park Square’s performance of “The Color Purple.”
Photos by Petronella J. Ytsma

Have I convinced you, yet, that The Color Purple is the show to see this season?! Wherever you are in the world, I hope that you have the chance to see this powerful story come to life. Read the book. Then, beg your theatres to produce this musical! Maybe you, like Celie, will see the world in a new color, not just black and white, but many shades of purple. 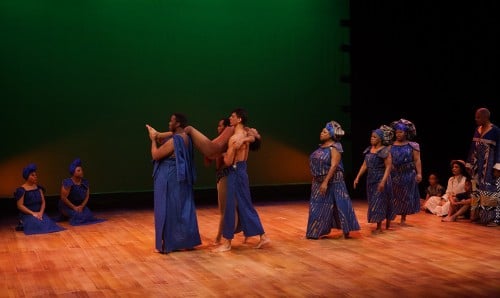 Based upon the novel written by ALICE WALKER and the Warner Bros./

First local Twin Cities Production featuring a live orchestra of 20 and some of the finest talent in the Twin Cities!

Journaling Prompt:  Who or what empowers you to be your authentic self and believe you are beautiful?