Quote of the Day:  The score is structured as an opera that explodes with Latin, pop and rock rhythms. Listen closely and you’ll notice the haunting themes Andrew Lloyd Webber weaves throughout the score to characterize the dramatic thrust of the story. James Rocco, Vice President Programming/Producing Artistic Director at The Orway in St. Paul MN. He describes the music and the mood it creates so well.

I’ll admit that I haven’t paid much attention to Evita. Of course, I’ve heard the famous “Don’t Cry for Me Argentina,” but somehow a live performance hadn’t come across my path until this week here in Minnesota. (I didn’t even see the movie starring Madonna). I know, where have I been? It is a beautiful, moving story of a woman who becomes the spiritual leader of a country. She is a real-life rags to riches girl who needs both safety and security and to know that no matter how great she becomes that she is still loved by the people, her people, and sings, “I never left you.” And, of course, they resent her, at first, calling her all sorts of names, saying she used her sexuality to seduce the president. Eva Perone is just like every other human being on this planet, complex and mysterious. She has flaws and selfish motivation, AND she has deep compassion and a generous spirit. Once she had all that a person could ever dream of having, she gave back. She lifted up the lowly. She befriended the widowed mothers, the abused, the sick, the spiritually and physically poor of her nation. She reminds me of Esther in the Biblical story of a peasant girl who was taken to be the bride of the king ended up saving her people when he was forced to declare genocide on them. She told him that she was still one of them, and that to save her people was to save her life as well. The king loved her so much that he stopped the violence. As Evita matures and faces the harsh reality of her own mortality, she becomes even more diligent in helping others, remembering her people, and going to them, healing, blessing, and loving them. And, they in return, lifted her up with their love and admiration, and at the announcement of her death, fell to their knees, crying “Santa Evita.”

What an incredible story. No wonder Tim Rice and Andrew Lloyd Webber were inspired to set it to music. They responded to the emotion of a country who found hope in a young woman with courage, strength, ambition, and compassion. And, the music, Mr. Rocco, you are so right, is haunting and strong. We are taken from beautiful, melodious songs, to firm, rhythmic beats. From the harshness of politics and military force, to a love song for the people. The costumes, especially for Evita, become the visual illustration of who she is and what she wanted to portray. At first, she is barely noticeable in her peasant clothes. She slowly gains in popularity and glamour, being gifted with sexy robes, to covering herself elegantly in white evening gowns. When she sings from the balcony as Mrs. Eva Perone “Don’t cry for me Argentina” her gown is a Cinderella piece with all the glitter and flair. She says, “Dress me up. Give the people something to look at that distracts them, that distracts me.” Then, when she takes herself more seriously and realizes that she can give voice to her people and help them rise from poverty and desolation, she dons more conservative, yet elegant, suits. And, at the end of her life, she is angelic in dress and demeanor, and the people do cry for her.

I can’t help but compare the actress who plays Evita to the real person. Caroline Bowman has landed the most prominent role for a female actress in a musical. This is not some fluff role that is so typical for leading ladies where they are defined by the men who fall for them, and are just a bit of arm candy and a pretty melody. No. Evita is a powerful force all on her own. This story is about her, the depth and complexities of who she was and how she influenced an entire nation, and even the world. We are still celebrating her life today. Caroline Bowman embodies the immortalized Evita and gives her life and breath. The entire cast is stunning and entertaining. The dancing is gorgeous and sensuous. I loved watching them move. 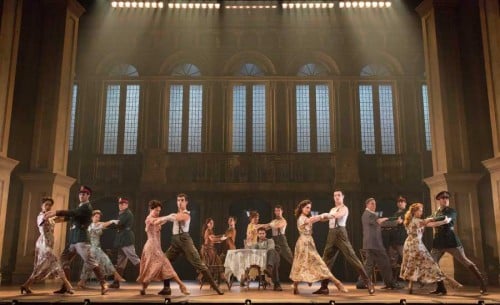 Evita is playing at The Ordway in St. Paul, MN, August 12-17, 2014, and continuing on tour to Des Moines, IA, Hartford, CT, and Washington, D.C. Visit the Evita  Broadway Tour website for more information. Or, go to The Ordway for tickets and showtimes, as well as to see what is coming next to this grand performing arts space.

Journaling Prompt:  Write about a woman, present or past, who has had a great impact on her community and/or the world.