Quote of the Day:  Fringe is an annual performing arts festival in the Twin Cities. For 11 days, over a thousand artists present works in every discipline and genre. No one selects the participating shows. Instead, a lottery determines which of over 400 applicants win production slots in the festival. MN Fringe Fest official website for show listings and venues.

Looking at the titles of the shows featured on the MN Fringe Fest facebook page, I think there would be something for everyone who wants to take in a show. I’ve heard it’s everything from kids writing their own plays to dance troups performing, and many, many adult shows with the word “sex” in the title, comedy, drama, and edgy stuff that hangs out on the “fringe”. Some will make you laugh, some cry. Others might leave you with that confused expression on your face. I only tried to get in one year when Coffee Shop Confessions was still fresh and the actors hadn’t scattered too far. I didn’t try this year. I’m writing a new play, maybe I’ll take my chances again some day. If it is truly a lottery, my changes are mediocre of getting in. However, we are a growing theatre community here in the Brainerd lakes and there is talk of having our own fest and calling “Fringe North.” Check back in the spring!

I want to highlight one show in this year’s Minnesota Fringe Fest. The producers contacted me and invited me to come view and review. If my travels bring me closer to Minneapolis next week, I’ll be sure to be in the audience. Here’s their description. 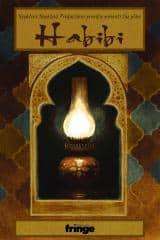 Habibi explores the tenuous relationship between an immigrant father and his wayward son. It’s set in San Francisco’s Mission District at the intersection of fine art and history. The play examines the father’s old world ideals and sentiment that are in direct conflict with his son’s American way of life. What’s so special about Habibi? 1. Habibi marks actor James “Jay Dubb” Williams’s first acting appearance in a MN Fringe production. You know James from his work around town at Penumbra, the Guthrie and for his work on Broadway. 2. Jamil Jude, former producer in residence at Mixed Blood Theatre, is directing. Jamil is a freelance director based in the Twin Cities. Most recently, he directed The Piano Lesson at the Olney Theatre Center in Washington, DC. 3. Playwright Sharif Abu-Hamdeh is a first generation Palestinian American and a new Many Voices Fellow at the Playwrights’ Center.  The performances, all held at Intermedia Arts, are: -Thursday, July 31 at 10 p.m. – Saturday, August 2 at 1 p.m. – Sunday, August 3 at 2:30 p.m. – Wednesday, August 6 at 7 p.m. – Saturday, August 9 at 4 p.m.

I’m interested in this play because I’ve actually been waiting for the next group of immigrants to share their story of how old world clashes with new world, generational ideas and lifestyles. It promises to have a little more depth than maybe some other shows might. And, of course, I want to support any new artist. I’d also like to hang out at the Southern stage because a gal I know is in two different dance companies performing there. I believe one of them is called Tapestries.

If you’re in the Minneapolis area in the next 11 days, take in a show, or seven. Who knows, you might just get inspired.

Journaling Prompt:  Have you ever been in or watched a Fringe Fest? What would you like to perform, or see?