Review of The Three Musketeers by Walking Shadow Theatre Company

Quote of the Day:  Looking at the chess board, King Louis XII says, “The king is fenced in on all sides. He’s the least powerful piece on the board…even the pawn can aspire to be greater.” His advisor responds, “Yes, but, the king is reason the other pieces move.” 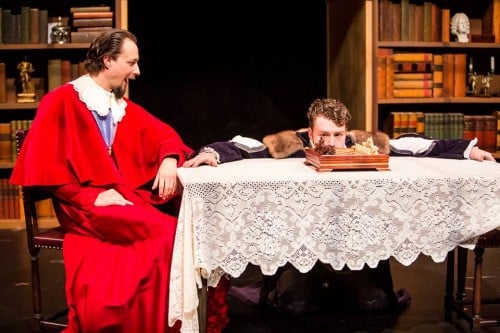 The Three Musketeers a new adaptation of Alexandre Dumas’ novel by John Heimbuch, directed by Amy Rummenie, and presented by the Guthrie Theater at the Dowling Studio is one of the best plays we’ve seen there! I brought my three boys, and my friend Krista brought her two boys. All five teenagers were completely engaged in the story. The swashbuckling is exciting. The story is complicated, yet intriguing. The characters are witty and athletic. The women are powerful. And, all in all, it is a great evening of entertainment! 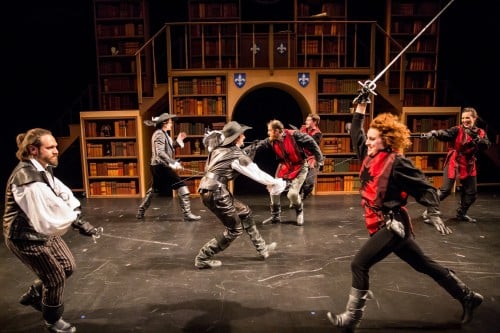 Playwright John Heimbuch read the entire 600 page novel aloud to director Amy Rummenie as they imaged writing and producing their own adaptation for Walking Shadow Theater Company. I believe they had fun with it. The boys said, “It’s fun to watch, and it looks like the actors are having fun doing the show.” That’s exactly how I felt. They get to have sword fights, wear cool costumes, do re-enactments, and play some of the most famous characters in literature. They do a great job bringing out the characters, many actors play several parts, and keeping the story moving along. We all laughed at the part where two actors stand on “the bridge” and talk about the war. It goes on for many chapters, they say, bogging down the whole story. “So, we’re going to skip the entire war?” “Well, maybe not the whole war,” and they proceed to act out two tiny scenes, then move on to the next part with the lovers, the fighters, and more fancy footwork. 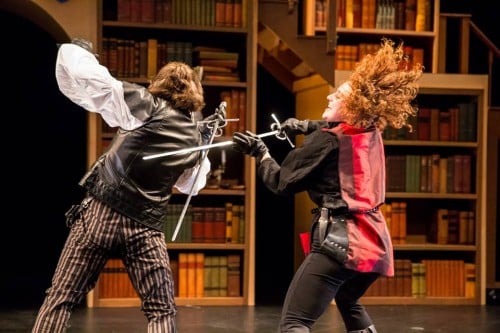 Shad Cooper as Athos, Aeysha Knnunen as Milady/Cahusac (aka look out for those red-heads) photo by Dan Norman 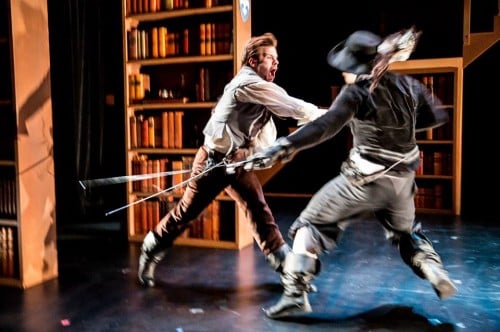 Bryan Porter as d’Artagnan, Casey Hoekstra as Rochefort (or the man in black with the scar) Photo by Dan Norman

The playwright himself calls this work “something playful, light-hearted, and adventurous.” It was a huge undertaking, of course, to condense the classic novel into an amusing and exciting work of art. He did it. The actors rise to the challenge. The audience comes eager to marvel at the story, and we were not disappointed. I’d go again. I hope you do, too. It’s not for the youngest audience members because of the death and violence. They can watch the Mickey Mouseketeer version. But, teens through adults will lean forward, laugh, and talk about it for days afterwards.

Thanks, Walking Shadow Theatre Company for producing this show. Thanks Guthrie Theater for bringing it to your Dowling Studio. Thanks, boys for coming to the show with your old mom. What a great way to celebrate Mother’s Day weekend! The Three Musketeers is playing at The Guthrie Theater May 9-25, 2014.

Journaling Prompt:  Have you read The Three Musketeers? How many versions/adaptations have you seen? Who’s your favorite Musketeer?

W is for West 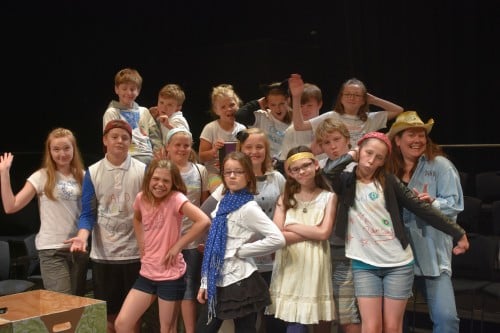 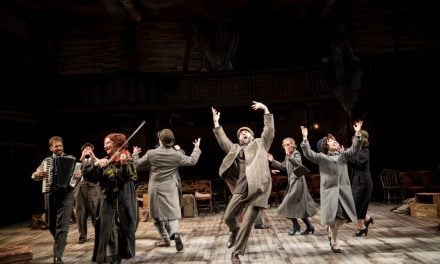 Review of Indecent at the Guthrie Theater, winter 2018