Review of Lilies of the Field at Open Window Theatre

Lilies of the Field is a 1962 semi-fictional novel by William Edmund Barrett that is based on the true story of the Sisters of Walburga.[1] It was later adapted into the film Lilies of the Field, and for the musical stage with the title Look to the Lilies. 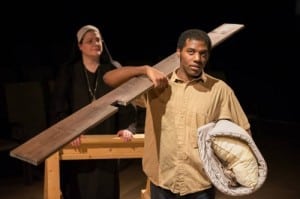 It tells the story of a black itinerant worker who encounters a group of  Catholic nuns who are convinced he has been sent to them by God to help them build a new chapel. Despite not being paid, he stays on to help them build a church. It is a legend that has been told for many years. (source: Wikipedia)

The title comes from this passage in the Bible, Matthew 6:28-34,

27 And can any of you by worrying add a single hour to your span of life?[k] 28 And why do you worry about clothing? Consider the lilies of the field, how they grow; they neither toil nor spin, 29 yet I tell you, even Solomon in all his glory was not clothed like one of these. 30 But if God so clothes the grass of the field, which is alive today and tomorrow is thrown into the oven, will he not much more clothe you—you of little faith? 31 Therefore do not worry, saying, “What will we eat?” or “What will we drink?” or “What will we wear?” 32 For it is the Gentiles who strive for all these things; and indeed your heavenly Father knows that you need all these things. 33 But strive first for the kingdom of God[l] and his[m] righteousness, and all these things will be given to you as well.

34 ‘So do not worry about tomorrow, for tomorrow will bring worries of its own. Today’s trouble is enough for today.

I included that last verse because I like it so much. It’s hard to keep from worrying. You have needs, goals, desires, and many roadblocks. One of the best phrases I learned, and repeat whenever I feel anxious, especially about money is, “You have all that you need.” In the play Lilies of the Field, Homer is a roamer. He has recently been discharged from the army, sometime in the mid 1950’s. He’s free. He chooses where he’ll stop, what he’ll do, and when he’s ready to leave. When Mother Maria Marthe says he has come in answer to their prayers, he scoffs. He says, “I just did what I felt like doing.” She basically says, believe what you want to believe. I know you are here in answer to our prayers. Despite his own resistance, Homer finds himself getting more and more involved in their cause. He stays on, accepting food and shelter as pay, and all the while claiming, “I’m free to go whenever I choose.” At one point, he does leave, only to return, and in doing so motivates the locals to provide the bricks and labor for the new chapel. 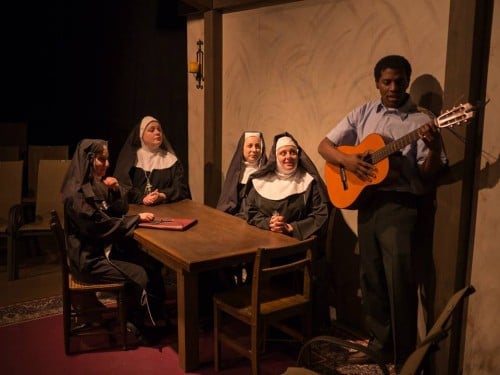 The storytelling in this play is so beautiful. Normally, I don’t care for a narrator, but in this play it is necessary. Father Gomez (played by Mark J. Paez) fills in the details and explains the passage of time. The wandering minstrel, or bard Christopher Erickson, provides folk music and creates the atmosphere. Sometimes, he walks through the center, singing, playing guitar or banjo. Other 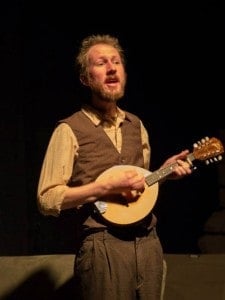 times, he might be on the fringes, softly playing an old hymn or bluegrass tune as the story unfolds. Music plays throughout the performance. The nuns sing a gorgeous Ave Maria, as they surround Homer, and he sings them the songs of the South, like Give me that old time religion. He also gives them English speaking lessons. At one point he laughs, “If you learn to talk like my folks, you’ll experience a whole new kind of segregation.”

I loved the feeling I had sitting in this intimate theatre, surrounding the storytellers with their representational props and fine acting. It’s refreshing to see characters of faith portrayed in a way other than judgemental and controlling. In fact, the priest has a kind, fatherly way of explaining the story and interacting with Homer. The nuns, especially Mother Maria Marthe, talk of being led, praying, and believing that their prayers will be answered. It is a story of a community building something good together, like the villagers in Stone Soup, they begin to provide what they have, and take pride in their creation.

Lilies of the Field, directed by Joy Donley, is playing at the Open Window Theatre. This is a new professional non-profit theatre located  in the Metropolis Minneapolis Building, 1313 Chestnut Ave., Ste.#102, Minneapolis, MN. They gave us excellent directions, and we quickly found it coming from a downtown location. Parking is free. This show runs through May 25, 2014. They are offering summer theatre workshops for kids, June 25-29, by E-Rhapsody Youth Theater Program, John Bunyan’s classic The Pilgrim’s Progress. I haven’t seen their plans for 2014/2015. I’m sure it will be great. This is a show you can bring the whole family to. It leaves you with a song in your heart,  Amen!

Journaling Prompt:  What are some legends and folklore from your home area?