Quote of the Day:  Trust the voices, listen to the voices, and the words will come to you when you need them. A summary of what I heard from Colleen Baldrica last night as she spoke to a group of us in Brainerd, MN, and read from her lovely book The Tree Spirited Woman.

For my May 2014 installment with the Insecure Writer’s Support Group, hosted by Alex J. Cavanaugh, I will share part of Colleen’s story with you. At age 17, Colleen’s whole world changed. She got pregnant, married, had a baby, and a few years later was a divorced mother. At age 27, she decided to go to college. Not having given school much effort in the past, she felt she was starting on step one. And, step by step, she earned her degree, became a teacher, then a school counselor, and along the way felt an intense calling to write a book called Tree Spirited Woman. I believe that her Ojibwe roots keep her connected to nature, particularly the trees. She said that she felt the spirit of the trees, heard the voices, and felt a presence much stronger than her own telling her this story.

She’d work on it, set it aside, live life, let it rest. Then, she’d hear the voices again, take it out, work on it, and continue on for 10 years, slowly working out the story. Did she set out to be a published author? No. She said that she never considered herself to be a writer. Remember, she didn’t really consider herself much of a scholar either. She had a life, messy and beautiful. She had esteem issues to work through, and overcame feelings of rejection and abandonment. She could have used the Insecure Writer’s Support Group! What she found was that she had a story to tell and that she needed to trust her intuition, and to listen to the voices. She surrounded herself with people who built her up.

So, what happened to that story? Oh, just this. With the encouragement of her husband, Colleen self-published Tree Spirited Woman, winner of a National Indie Excellence finalist book award in Spirituality, an Independent Publisher Book Award (IPPY) bronze medal winner in New Age: Mind, Body, and Spirit, and a finalist in the Best Books 2006 awards in Mind, Body, and Spirit. AND, this year the book was included in gift bags at the Oscars! Also, it has been voted “A favorite book by a Minnesota Female Author” from the Minnesota Women’s Press “What Women Want” survey.

Moral of the story: Listen to the voices, People! I mean the good ones, the intuitive ones, the ones that have a story that only you can tell. The negative ones are the nasty committee who need to go meet some other place! 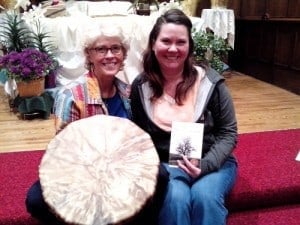 Journaling Prompt:  What are the good voices telling you to do today?

P is for Piano Recital