Quote of the Day:  Messy, Beautiful is not just the subtitle of my book, Carry On, Warrior- it’s a way of life for me. If I’ve learned anything it’s that we all need to stop trying to clean life up. It’s messy. Parenthood and marriage and faith and friendship and healing and writing- they are all messy. Glennon Melton, author of Carry On, Warrior

I’m sitting at my kitchen table where I do most of my writing/blogging. When I look up, the ceiling has a large yellow water stain where mess from an overflowing toilet got trapped between the floors, soaked into the sheet rock and dripped, (no, poured) down during piano lessons, which I teach every day after school. I immediately made efforts to call a repairman to take a look at it. It took him a week to call me back. He said he’d come at 5:30 on Wednesday, a week after the toilet incident. By 6:20 that day, I was hungry and tired of waiting for him to show up, so I left. Then, I left for the whole weekend for a Creative Women’s Retreat, because sometimes, you just need to get away from your stuff, and your stink, and the messes, and the demands to take care of everybody and everything. Monday morning, I called the repairman back and reminded him that I still had that stink trapped between floors, and I was starting another week of piano lessons, and I’m wondering how much mold is growing in there. He said he’d stop by after noon. I took my chances and went to my workout. I either missed him, or he didn’t come. And, still that stink is trapped between floors.

Crap happens. You try to take care of it, but sometimes the mess is too big for one mama, even a really strong mama who stood up to a bully and said, “Stop trying to control me.” Sometimes, even really strong mamas need to ask for help or take a break.

When I finally started dating again after my divorce, I was terrified about letting the new guy into my home. I said, “Well, here it is, our home, with pieces of our lives scattered about.” He said, “And, that’s how it should be.”  I said, “I put my kids’ needs first all the time.” He said, “I’d think something was wrong if you didn’t, but that doesn’t mean that you don’t have needs of your own and that you should deny them.” My therapist had said something similar, “You can’t be a mom all the time.” I thought that was what I was supposed to be, and if I wasn’t, then I wouldn’t be a good mom and my kids would be ruined for life.

I looked at the mommy bloggers who posted the first day of Glennon Melton’s Messy, Beautiful Project, and thought, Look at all of them with pictures of their babies and cute little kids. They’re writing about poopy diapers and nightmarish bedtimes, and I have big, football player sized boys who wipe their own butts, now, and use too much toilet paper. I haven’t read them a bedtime story in years (and I miss it).

I’m the proud mother of four teenage boys, although the biggest one just turned 20. And, like my mom says, “They never stop being your kids,” because you worry about them when they’re miles away in college, or driving off on their first solo trip in the mini-van, and your heart almost pounds out of your mouth as all four of your babies are in one car, and you’re not the driver, and you think, “There goes my whole life.” And, you wonder, what do they really think of their mother who divorced their father then started dating a Biker Chef and literally rode off into the sunset with him one summer, but came back, happier and free-er, but still wanting more than anything for them to know that they, too, can jump on the bike and do brave things and climb higher mountains, and no matter where I am, or they wander, we’re family, and I love them, even when they clog the toilet.

And, sometimes, the messiness gets trapped somewhere and we wait for the right person to come along and air it out. Until we realize that we’re in charge of our own lives, but that doesn’t mean that we have to do everything ourselves. We can ask for help and expect to get it. We can show our kids that independence doesn’t mean abandonment, and that a good meal shared together is a great way to end a long day. 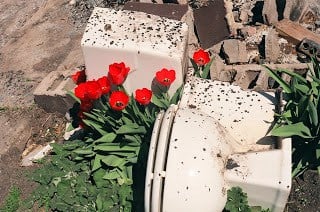 The repairman finally showed up, during piano lessons, and said the old toilet has to go, the ceiling is easily fixed with Kilz and a fresh coat of paint, and he’ll be back later to take care of it (probably during piano lessons). So, mama, and her boys, get a new toilet for Easter, and we’ll all come out smelling sweeter, all the better to flush the turds of life. Hallelujah!

Thanks, Glennon, for inviting me to be part of your Messy, Beautiful Project. With four boys and a cat, I know messy!

Theatre Classes for Kids in the Brainerd area