French Toast is a favorite of ours for Sunday brunch. It is rumored to have been started by the French who came up with the batter that we dip it in to use up stale bread. In Germany, they have a 14th century recipe called Arme Ritter “poor Knights” a name also used in the Scandinavian languages, and the French call it pain perdu, meaning lost or wasted bread. In Quebec, they call it pain dore’ –  golden bread. The Biker Chef uses Grand Marnier liquor to spice up his concoction.

Four eggs, 2/3 cup milk, 1/2 cup orange juice, and a “good business-like shot” of Grand Marnier, 1/4 cup sugar, 1 tsp. salt, 1 tsp. vanilla, 1/4 tsp. cinnamon and a dash of nutmeg. Mix it up in a large bowl, soak the bread slices for a couple moments on each side until the bread sucks up the batter. Drop it onto a greased pan, brown it up on both side, smack it on a plate, load it up with butter and home made real Maple syrup (sapping season finally started here!), and bon appetit (enjoy!) 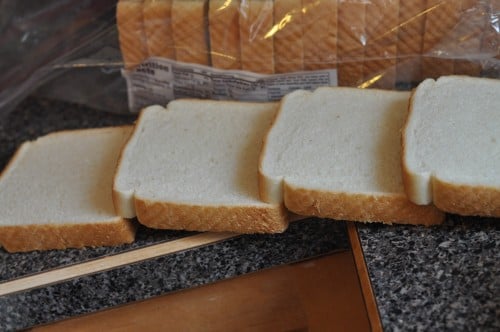 Texas Toast, lined up and ready to be dipped. 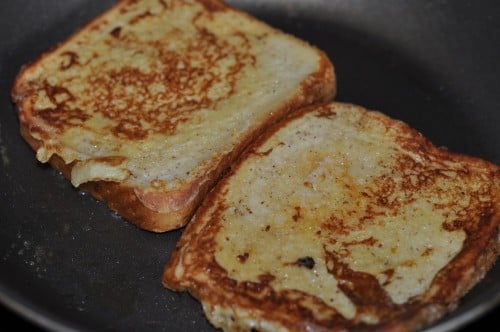 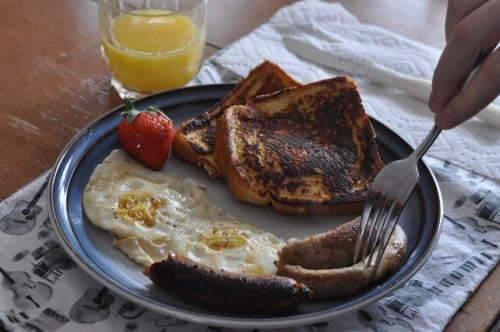