Review of Born Yesterday at The Guthrie Theater in Minneapolis

Quote of the Day:  That’s the problem, there are too many good people in this town! line by Paul Verrall, referring to Washington, D.C., from the play Born Yesterday, by Garson Kanin, directed by John Miller-Stephany, playing at The Guthrie Theater in Minneapolis, Nov. 23, 2013 – Jan. 5, 2014.

Garson Kanin wrote Born Yesterday in the 1940’s, during World War II, and it premiered on Broadway in 1946. He was bold in his criticism of the US government, politicians, and those who try to control them. In his play, Harry Brock is a thug, a mob boss of sorts, who has bullied his way to financial success and power. He has come to Washington, D.C. to buy himself a senator. While he has the wealth of a king, he has the mannerisms of schoolyard bully. He expects people to jump at his every command and barks orders at everyone from the bellhop to his girlfriend, Billie Dawn. Billie is no dummy, despite Harry Brock constantly telling her that she’s stupid. Oh, no, she knows how to get what she wants. Although, Harry Brock wants to keep her in the dark, he’s equally embarrassed that she comes off as a dumb broad in the high society of Washington, D.C. Enter, Paul Verrall, a writer with a bend towards truth and justice. Harry Brock thinks the writer is just the man to educate Billie. In the end, we see just who is educating whom.

Photo by T. Charles Erickson
John Patrick Hayden as Paul Verrall and Alexis Bronkovic as Billie Dawn
Sparks fly between the writer and the chorus girl.
Born Yesterday  is a comedy with serious undertones. The setting is a corrupt Washington, D.C. The main characters are using whatever means they can to survive and get ahead. The clash of cultures between the so-called civilized and the uneducated creates laughs. The characters, their actions and interactions, are titillating. Sometimes, we laugh because we’re uncomfortable. Sometimes, we laugh at the ridiculousness of it all, and sometimes, we laugh because what seems like an exaggeration is most likely understatement.
While the set-up is funny and the characters delightful, at times even caricature, abuse is no laughing matter. I got nervous when Harry Brock verbally abused everyone around him. I felt sick when he carried through with his threats. That part is not meant to make light of abuse. It shows how dark some people are and to what means they will go to maintain power. It created enough tension to make me wonder if this play should really be billed as a comedy.
Born Yesterday is visually stunning with a gorgeous set, a swanky hotel in Washington, D.C., including a view of the capital outside the window, and costumes that you can’t take your eyes off of. Billie Dawn keeps all eyes on her as she ascends the stairs to change out of her dressing gown. The show is so well cast, and all of the actors seemed to become their characters. Alexis Bronkovic earned her standing ovation. Peter Thomson who plays the senator reminded me of a character out of a 1950’s television show, like Alan Brady in The Dick Van Dyke Show.
I attended this production with my friend Krista, her mom, sister, and niece. Before the show, we enjoyed a delicious dinner at the Level 5 Cafe at the Guthrie, served by a delightful waiter named Ray. (When you release your first film, we’ll be in the front row, ready to write a stellar review!)

Photo by Krista Rolfzen Soukup.
Do you see a familiar face in the mirror?

The stunning Rolfzen women.
Thanks for letting me hang with you!
Also playing at the Guthrie is their traditional A Christmas Carol. I missed attending the blogger event for that show because the Brainerd Warriors football team kept winning! We won the semi-finals on blogger night, and played in the championship game on Saturday night. It was a tough loss to the outstanding Owatonna team. My son Zach is a sophomore on the Warriors team, so, of course, we attended both games. The boys were disappointed that we missed our chance to attend A Christmas Carol for blogger night. They suggested we could go at a different time. It really is a great show for the family, minus the youngest ones because the ghosts can be scary. My sister Joy attended A Christmas Carol and said it was as great as last year, plus more dancing, which she loves. She went with her boyfriend who was there for the first time, and he loved it. They’re both interested in seeing Born Yesterday which is a great show for teens and older, another way to have a great night on the town in Minneapolis.
A Christmas Carol  is running through December 29, 2013.
Born Yesterday is running through January 5, 2014.
Go to The Guthrie Theater for tickets and showtimes.
Go. Create. Inspire!
Journaling Prompt:  What are some of your favorite comedies or holiday shows?

W is for West 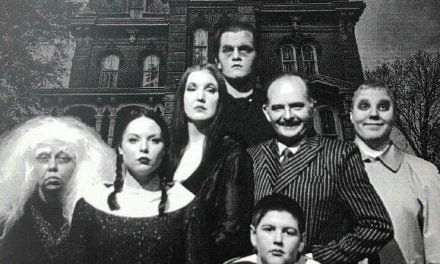