Review of Tribes at The Guthrie Theater

Quote of the Day:  Two quotes from Helen Keller
Although the world is full of suffering, it is full also of the overcoming of it.

Literature is my utopia. Here I am not disenfranchised. No barrier of the senses shuts me out from the sweet, gracious discourses of my book friends. They talk to me without embarrassment or awkwardness. 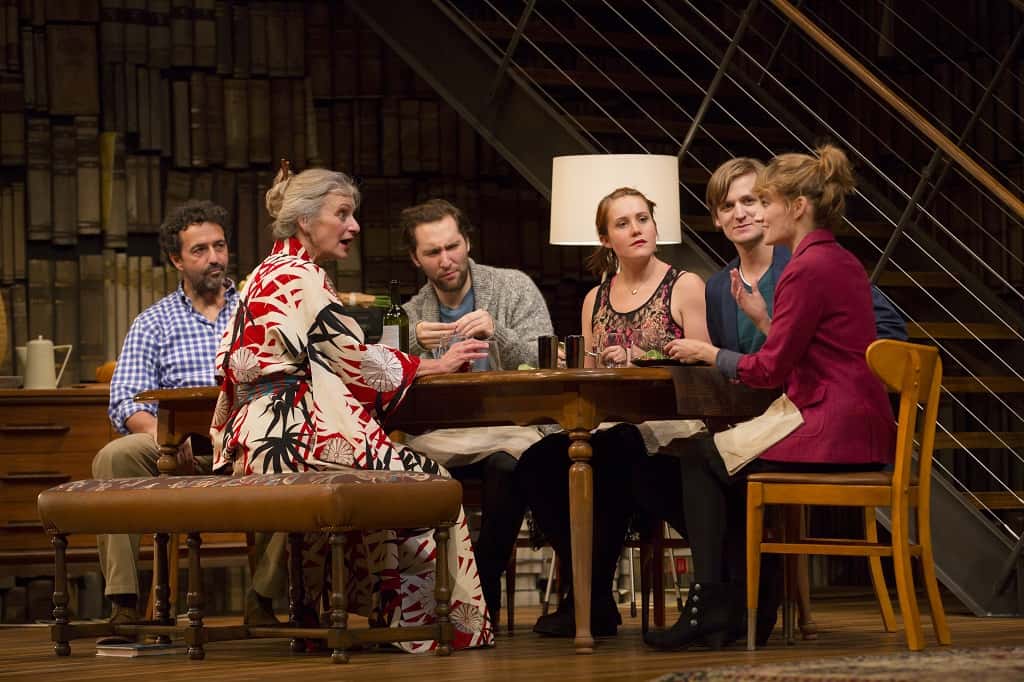 The cast of the Guthrie Theater’s production of Tribes, by Nina Raine. Directed by Wendy C. Goldberg, set design by Alexander Dodge, costume design by Anne Kennedy and lighting design by Josh Epstein. October 5 – November 10, 2013 on the McGuire Proscenium Stage at the Guthrie Theater, Minneapolis. Photo by T. Charles Erickson.

Tribes, written by British playwright Nina Raine, is a contemporary play set in North London about family, love, and living with different abilities. The above photo shows the entire cast. Mom, Dad, three kids, Daniel, Ruth, and Billy, and Billy’s girlfriend, Sylvia. Naturally, they are sitting at the table, having dinner with Sylvia for the first time, and the drama ensues. Billy is the only deaf person in a hearing family. His mom, Beth, taught him how to speak and lip read. He doesn’t sign to communicate. Sylvia is a hearing child born to deaf parents. In her family, it is genetic, and she watched her sister go from hearing to deaf. She is now becoming deaf and already knows how to sign very well because she grew up signing with her parents. She doesn’t lip read very well. It is amazing to watch Billy’s and Sylvia’s worlds coming together and how his family reacts.

This play, which is so much about communication, shows how hard it is for people to communicate with each other, no matter what language they’re trying to use. The cast (family) is literally surrounded by words. The set looks like the inside of a library. Books line the walls from floor to ceiling. The parents are writers and readers. Daniel is working on his thesis. Ruth is trying to interpret the French lyrics to an opera song that she is learning. Billy is learning sign language, and Sylvia is learning to lip read and to adjust to another way of living and communicating.

Interestingly, the language that some of the characters use is crude, which could shut out and offend some audience members. And, yet, what is not spoken packs an even more powerful punch. While I wouldn’t be comfortable watching this show with anyone younger than a high school student, I think that all ages can relate to trying to fit into all kinds of dynamics and worlds around them. In my favorite scene from the play, Sylvia admits that she can no longer hear the nuances of music. It is all becoming noise to her. Then, she sits down at the piano and begins to play. The family surrounds her, shutting out Billy, and as she strikes each chord, the books around them light up. It was fascinating to watch. It’s like her music connected with other ways of communicating, and it made me think how one art form inspires another. Maybe, as one way of communicating disappears, another appears.

Tribes is a play for anyone who has ever felt misunderstood. It is about dysfunctional love, and how we all have barriers and ways of coping and loving and living. It is playing at the Guthrie Theater, October 5 – November 10, 2013. This cast is phenomenal in bringing Nina Raine’s story to life. These six people: John McGinty, Sally Wingert, Tracey Maloney, Stephen Schnetzer, Hugh Kennedy, and Anna Reichert, really seem like a family with all its quirks and ways of loving each other and pushing each other away. The Guthrie has done well to bring this contemporary play by a female playwright to its stage and a new story for its audiences to enjoy and find a connection. Well done.

Journaling Prompt:  What barriers have you had to overcome?