Quote of the Day:  Great Quotes from Lorna Landvik, Minnesota author, actor, comedian, and storyteller. She’s one of the best speakers you could get for a book event.

I’m not going to accept “No” as my final answer. Lorna Landvik, regarding her numerous rejections. She now has 9 books published and one on the way.

The zone of play is the sheer discovery in creating characters and story. Lorna is a panster (is that how you spell it?). She doesn’t plot. Her characters lead the way. I’m that kind of writer myself.

My muse is my permission to write. According to Lorna Landvik, the muse is a myth. The muse is the time we spend with our Ass In Chair. It is also giving yourself permission to be creative and to pursue the creative life. (We’re working on that over at Primo Art Spa.)

Lorna Landvik says that “Place is a character.” One of the other presenters was quoting the Writer’s Encyclopedia in saying that “setting is not the essence of the story.” I took issue with that right away. In my play, Coffee Shop Confessions,the coffee shop held the essence. It was the place where truth spilled out, like an overturned coffee mug. 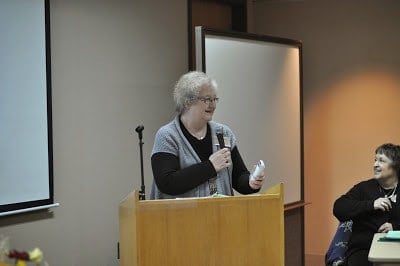 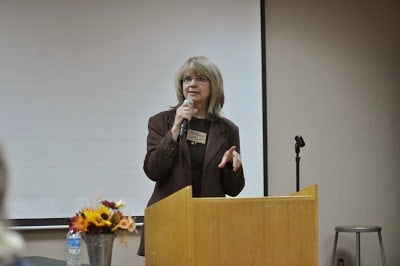 Lorna Landvik, author of nine novels, her latest is Mayor of the Universe
It was a great day for a Writer’s Workshop. The Brainerd Writer’s Alliance hosted the workshop at the library. They’d held a contest and the winners of each category received an award, and several were there to read their work. I enjoyed all of them. One young woman, Laura, drove up from Mankato to be part of this event. She said she wasn’t sure that writing was something she’d pursue seriously. I told her, “You’ve come all the way from Mankato to find your ‘peeps’, I think that writing is your thing and that you are pursing it.” How fun. It was great to mingle with other writers, hear their stories, and learn from two of my favorite Minnesota authors, Candace Simar and Lorna Landvik.
Lorna gave us a writing prompt that started out feeling a little bit like we were doing Mad Libs. She asked for an adjective (purple), a noun (sneakers), and a place (Bangkok), then she gave us a few minutes to write about a character using all three words. I popped out a bit of flash fiction, and the group wanted to hear more! Lorna says that when you think you’re stuck in your writing, introduce a new character, or wonder about the ones you have. As in, I wonder how this character would react if a rock song was blasting on the car radio? Or, I wonder how this character would react to a fresh pan of brownies? Maybe even write a bit of flash fiction to get the flow going again.
I hope you all have a chance to attend workshops or events in your favorite areas of the arts.
Go. Create. Inspire!
Journaling Prompt:  Now, it’s your turn. Use the above words to create a character and a scene.