Quote of the Day:  I think Jane Austen would love this production of her novel, (Pride and Prejudice). Reflection on watching the show from Pat, one of the ladies who accompanied me to The Guthrie Theater. She is a long time fan of Jane Austin. 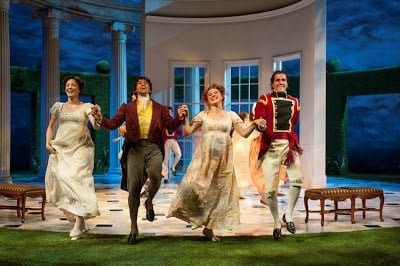 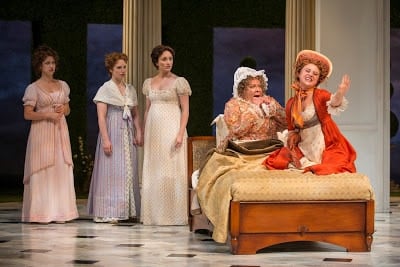 Ivy Beech (Kitty Bennet), Ashley Rose Montondo (Elizabeth Bennet), Christine Weber (Jane Bennet), Suzanne Warmanen (Mrs. Bennet) and Aeysha Kinnunen (Lydia Bennet) in the Guthrie Theater’s production of Pride and Prejudice, by Jane Austen, adapted by Simon Reade. Directed by Joe Dowling, set design by Alexander Dodge, costume design by Mathew J. LeFebvre and lighting design by Philip S. Rosenberg. July 12, 2013 – August 31, 2013 on the Wurtele Thrust Stage at the Guthrie Theater, Minneapolis. Photo by Michael Brosilow.
Oh, to be able to write the kind of classic novel that lives on through the centuries, made into plays and movies, remakes, copycats, and modern adaptions! That is what happened to Jane Austen’s most popular novel Pride and Prejudice. Audience members who are lifelong fans, like Pat in the above quote, come expecting their beloved characters to come to life. They hope to see them embodied in the actors and their story played out the way they saw it in their heads while reading the book. The creative genius of the Guthrie Theater does just that. The audience was riveted to the stage, laughing often, sighing occasionally, and completely taken in by the performance.
If you are expecting stuffy shirts and straight lines, you will get it only in the costumes and décor. Then, you will get the delightful contrast of high humor, sassy characters, and endearing relationships. You feel like you are part of that sisterly bond, friendship mixed with annoyance, and utter loyalty to one another. We want to be strong like Elizabeth and turn our backs on ridiculous social norms and expectations. We want to know that our fathers love us more than money and status and would say, like Elizabeth’s father says to her, “I could not have parted with you for anyone less worthy.”
My friends have already been asking me, “How was the show?” I think they want to know that Mr. Darcy is both arrogant and handsome. They want to hear that Sister Bingley is snooty and mean, and that Lady Catherine is just as awful as they imagine. (The actress and her costume reminded me of Malificent from Disney’s Sleeping Beauty.) They need to hear that Mother Bennet is as hysterical as anyone they’ve ever met (loved Suzanne Warmanen’s portrayal of Mrs. Bennet). And, above all, they need to know that Elizabeth is both beautiful and strong, someone we admire. She is!
The set was amazing. The inner circle spun, and an outer circle created movement that gave us a sense of moving from place to place or time passing. We had perspective from within and without. The music, the dancing, the colors, the costumes, all were a delight. The show is full of humor and fun, not at all stuffy or boring, and it offers a few surprises, even for the actors (wink).
Six of us women from the Brainerd lakes area rode together to the show. We all give it two thumbs up. We had a wonderful time and will be dreaming about it and talking about it for a long time.
Pride and Prejudice is playing at The Guthrie Theater in Minneapolis, July 6 – August 31, 2013. Sunday’s performance was sold out, so don’t wait to call for tickets! This is the show to see this summer!
Trivia question: Do you know what Jane Austen’s original title was for Pride and Prejudice? Which title do you prefer?
Go. Create. Inspire!
Journaling Prompt:  What favorite story would you like to see played out on stage or in the movies? What books/stories do you keep going back to over and over?

Millie and Willie have Fun on Friday

Review of Pippi Longstocking at the Children’s Theatre in Mpls. 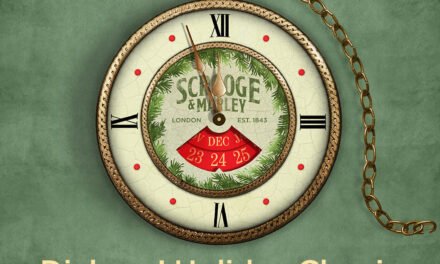 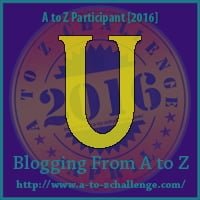