Quote of the Day:  People use humor to deflect their true emotions. A line used several times in the play Buzzer written by Tracey Scott Wilson, Produced by Pillsbury House Theatre and performed at the Dowling Studio at The Guthrie Theater in Minneapolis, MN.

Buzzer is a contemporary play set in urban America. It has mature themes and adult language and pulls you in from the opening sentence. The characters feel like people you already know and as you’re watching, you feel like you are inside the apartment ready to join in on the conversation. I give the director, Marion McClinton, credit for how well the characters interact with each other and the audience. The way they turn towards us, look out as if we are another character, or open up so we can really feel what they are feeling is what pulls you into their story. The actors do an amazing job of creating the tension around their situation. 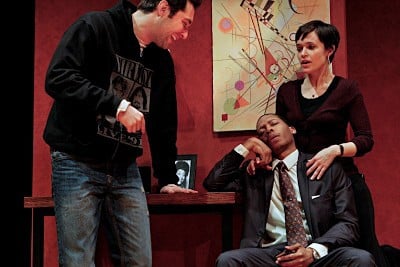 Photo by Michal Daniel
Rarely do you see a show where you are pulled in so completely that you lose yourself in the performance. You forget that you’re at a play and you are mentally interacting with the people on stage. My sister said that when Hugh Kennedy walked on stage as Don, she felt like she knew him. He never seemed like he was acting, but that he was Don, living the life of a recovering alcoholic, trying to find his way, working the program, and fighting so many obstacles.
This is a story about relationships, trust, and fear. It makes you ponder the question: Are our fears founded on experience and instint? When is the truth too painful to be spoken out loud?
I could go on to analyze this incredible performance and story, but I’m afraid I might give too much away. This is a story that needs to be experienced. You have until March 3, 2013, to see this show at The Dowling Studio at The Guthrie Theater. It is a performance that will stick with you and get you thinking about how you act and interact with each other, what pulls us in and and out of relationships, and how we live.
Go. Create. Inspire!
Journaling Prompt:  What are your fears in your relationships?

Kids and the Art of Writing