Sundays are for Riding

Call it a pre-leaf run. Call it a Sunday ride. Call it taking advantage of those last gorgeous days of summer. 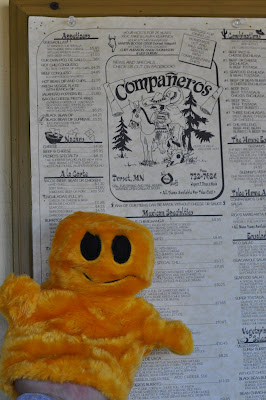 Mr. Happy called it delicious.
The Biker Chef did about a 400 mile “pre-leaf” run into Wisconsin the weekend that I was at a family wedding. He stopped over at my place when we were both back from our journeys, his eyes red from the dust and wind, hair sticking up and out of his cap, and a smile on his face. He said he was on roads he’d never been before, stopped at a fun bar & grill for a sandwich and mentally took note of the byways.
The Sunday of Labor Day weekend, I jumped on the back of the bike with the Chef, and we met up with his friend Chad and Chad’s son. We rode north through the woods and along the lakes, the sun on our backs and just a hint of cool in the air. It was one of those days that you’re not sure if you need your jacket. We stopped at the Bungalow in Emily where they have hand-battered onion rings, served stacked on a stick with three different dipping sauces. The guys talked about their summer tours. Chad said he had a grin from ear to ear most of the time during his Western Tour through SD and WY because he was riding with his wife and son, and they had such a great ride.
The next Sunday, Sept. 9, the Chef and I rode up to Companeros in Dorset, MN for what the Chef says is the best Mexican food in the area. I was still celebrating my birthday, so even though I was stuffed from the “Chicken Especial,” I said, “Go ahead and order the fried ice cream. I’ll just have a couple bites.” Turns out I ate most of it. The Chef said their fried ice cream is the best he’s ever had, even in Mexico. I said, “When we go to Mexico, we’ll have to be on a quest for the best fried ice cream.” No argument there.
The Chef says he’s not ready to park the bike, yet, even though we have a frost advisory for tonight, and our days are getting shorter. He said, “That’s what the heated electric vests are for.” The leaves are turning early this year. If you want to see them at their peak before the winds blow them away, you need to be ready to jump on the bike, whether it’s hot and sunny, or cool and crisp.
Be safe. Journey on, and Happy Trails!