Quote of the Day:  Words are powerful. Enid Arabella, main character from Bucanneers, currently playing at The Children’s Theatre Company’s in Minneapolis.

Try talking your way out of a situation like this! 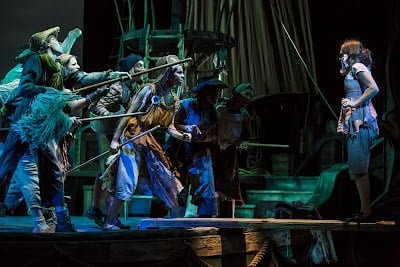 Photos by Dan Norman, The Children’s Theatre Company
Enid Arabella, the quick thinking adventuresome girl, runs away from one bad situation at home and into a worse one on the high seas. She finds herself on board a pirate ship where Captain Johnny Johne’ collects children from around the globe and forces them to work on his ship. Enid Arabella has to think fast to talk her way out of walking the plank, a challenge with a sword, and acceptance from the other crew members. She ends up leading a mutiny and getting the cruel captain off the ship. But, the danger isn’t over. Enid Arabella’s parents are searching for her. The captain is a champion swimmer, and a ship without a leader is adrift on the open seas.
The crew elects Enid Arabella as the new captain. She declares that they shall be Buccaneers not Pirates. What’s the difference? Pirates are the robbers of the seas. Buccanneers are adventurers with no intent to hurt anyone. 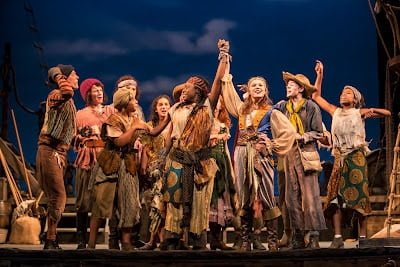 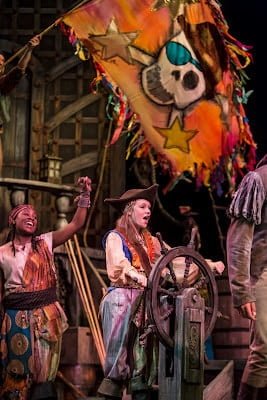 Enid Arabella at the helm
Buccaneers has all the elements of a great show for older elementary students through adults. It does have some scary images that might be disturbing for younger kids. I heard one mother say that her preschooler wanted to leave after the opening scenes on board the ship. The captain looks and sounds scary and he doles out some harsh punishments. The boys who attended the show with me, ages 11 & 13, loved the show. They thought it was exciting. Said it was, “Awesome,” and were really engaged with the show. I loved how they included music and dancing, a bit of humor, and characters from around the globe. I thought it was so well cast with a colorful and interesting group of “kids.” The costumes and choreography were beautiful and lively – entertainment for the eyes. I asked the boys what surprised them about the show. They said it was the captain’s hidden talent. I was surprised to find out where the music was coming from. Loved the music, by the way, made me feel like dancing a jig right there in the aisle.
++++
The Children’s Theatre Company is playing the world premiere of the raucous musical Buccaneers written by Liz Duffy Adams with music by Ellen Maddow September 14 through October 21. Buccaneers includes all the swashbuckling you would expect from an original pirate musical, plus an unforgettable young heroin, Enid Arabella. Tickets range from $10–$56.00 for adults and $10–$46.00 for children, and are available by calling (612) 874-0400 or by visiting www.childrenstheatre.org. A limited number of seats for $10 are available on first come first served basis by calling on Sundays, starting at noon.
﻿
Journaling Prompt:  Did you ever dream of running away from home? Did you go? Where would you go if you dared to leave?