Quote of the Day:  As an actor, no one could touch him. As a human being, no one would want to. – Sunshine Boys character Willy Clark, commenting on his comedic partner Al Lewis. 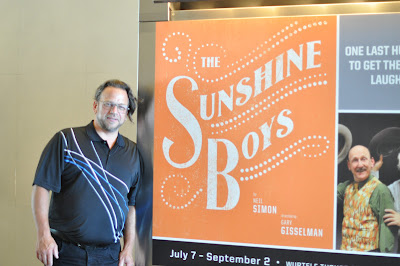 I attended this one with the Biker Chef.

The comedic team of Lewis and Clark were once the hit of Vaudeville, the times before radio and television, when people had to leave their houses to find entertainment. Comedy was quick, witty, and full of sight gags. The costumes alone caused a chuckle. So, what happened to the legendary Lewis & Clark? They split up after an appearance on the Ed Sullivan Show, and haven’t seen or spoken to each other in 11 years.

As any touring group knows, what appears to click on stage, often clashes off stage. Personalities collide. Entertainers wrestle for creative control. Personal habits and relationships cause conflict. So, it is with Lewis & Clark. (see the above quote) They worked together for years, spitting in each other’s faces, arguing about the lines and the delivery, but in the end admiring the other for his talents. The truth is, they need each other, and neither one is willing to admit it. In an attempt at a revival of the act, we are shown what it means to work as a team. Peter Michael Goetz (Clark) and Raye Birk (Lewis) are that kind of brilliant team as they bring to life Neil Simon’s The Sunshine Boys.

I was drawn into the story of these two aging actors, how entertainment changed during their careers, and what elements are needed for good comedy. What made us laugh during this show? The writer, of course, needs to provide good material, the set-up. Some jokes happen within a few lines. Others are set up early in the show and get the biggest laugh when it’s brought back at the end. The actors need great comedic timing and play off each other, as well as play to the audience. They need to give us a chance to laugh without making it seem like they’re expecting our response. The audience loves it when we know something that another character doesn’t know, and we anticipate the reaction. Also, we respond with increasing laughter to repetition. We are so easy, as audience, to laugh at a recurring joke or physical schtick, like the locks on the door, or the rearranging of furniture, or the look on the “doctor’s” face when the curvey nurse bends over. The actors need to be willing to play the fool, while pointing out the folly in all of us.

The Sunshine Boys is playing at the Guthrie Theater in Minneapolis through September 2. Click on the link to watch video clips, see photos, and for ticket information. It’s both a look at entertainment of the past, and an enjoyable evening in the present.

In the show, Lewis & Clark try to explain to Clark’s nephew what words are funny. They say, “Words that start with K, or have a K sound in them, are funny. Cookies is funny.” Before the old boys start their rehearsal, they talk about crackers. Clark says, “I only have Graham, (something) and coconut.” Notice how I remembered coconut crackers? Try saying it out loud. Does it give you a little chuckle?

Journaling Prompt:  Make a list of funny words or phrases. Use humor in your writing, in your art, and in your life. It really is the best medicine.

The Biker Chef and I had fun on our first trip to the Metro together, and our first show at the Guthrie together. More on our Metro adventure later this week. Here’s a teaser; We ate at this pub. Do you know where it is, or the name of the place? 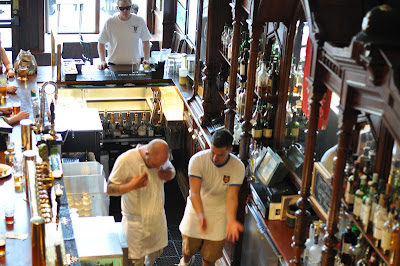 I had good comedic timing in snapping this photo.
You can imagine what these two bartenders were discussing. 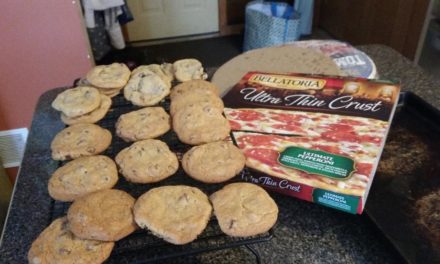