Quote of the Day:  Grown-ups have lived their lives and made their wars. We kids didn’t start these wars or make these messes. We deserve a chance to live our lives.This is a paraphrase from Anne’s line in The Diary of Anne Frank at the Park Square Theatre in St. Paul. I attended this performance as a chaperone with about 200 eighth graders from Forestview Middle School. It was stunning. The cast of characters were exactly how I have pictured them through my readings, imagings, and visit to the Annex. 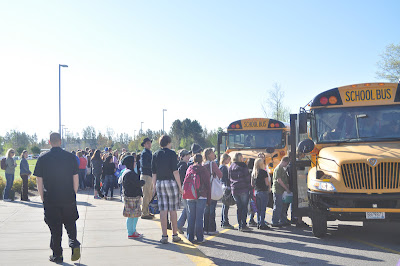 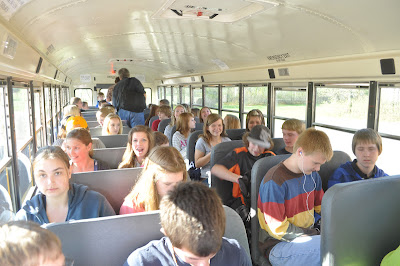 My busmates.
Overall, good travel companions.
Although, they got a little excited driving through the tunnels. 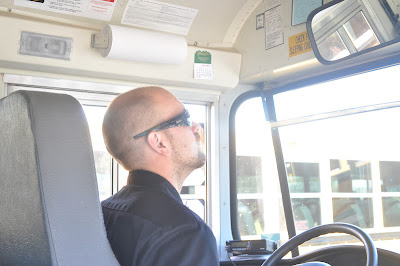 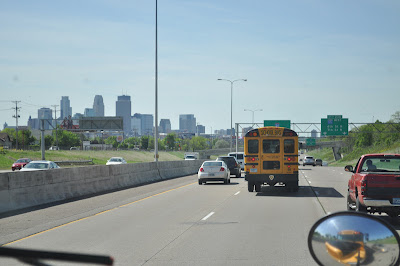 We’re not in lakes country anymore. 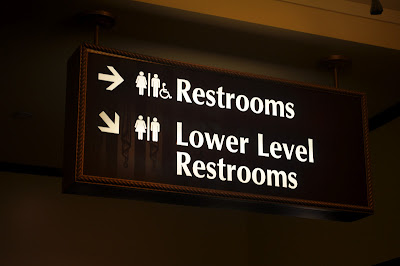 We missed our rest stop on the way down, so this was a welcome sign as we ran into the theatre! 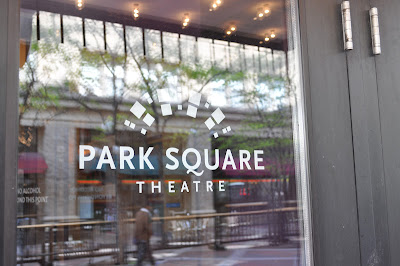 This was my first time at the Park Square Theatre. Probably the first for most of the 8th graders.
The only professional theatre experience for many.
After a mad dash to the restrooms and a speech on proper theatre etiquette, the students found their way to their assigned seats and settled in, wiggles, giggles and all. I sat amongst them, down front, theatre left. The stage was set as if it were left in disarray. The music played low, that haunting strain of violins in a minor key. The house darkened, and the children quieted.
Otto Frank enters slowly, from the lower staircase, the one hidden by a bookshelf, but never fully concealed. Miep is with him, new life in her belly, while they survey lives too soon ended. Otto picks up pieces of their existence, lovingly strokes a glove, glances at empty rooms, overturned chairs, and turns to leave. Miep holds out a box, “There’s papers in here, letters. Don’t you want to read them?” No, says Anne’s father, shaking his head, lifting a hand, waving away the pain. “Anne’s diary,” says Miep as she holds it out to the lone survivor of the Annex. The story unfolds as a memory.
You will feel uncomfortable watching this play. The set is designed to create the feeling of confined quarters. It doesn’t come all the way to the end of the stage. It has distinct boundaries. Screens on the walls emphasize that even when you’re in a room, you’re not alone. You never have space that is all your own. You have to share everything. You must walk in stocking feet during the day. You may not run water or use the WC. (Did they have to hold it all day, waiting much longer than the two and a half hour bus ride we took from Brainerd?) You can’t do this. You can’t do that, and you will not step foot outside until the war is over. They couldn’t imagine it lasting much longer. I mean, it was horrible, what was happening. The allies must be stronger. And, yet, they spent two years in hiding, waiting in fear, worrying about every sound and depending on their brave friends on the outside to bring them food and news and hope. The actors, director, and crew brought all that to reality for us, who watched with uncomfortable wiggles and coughs, and sometimes nervous tappings.
I attended a production of The Diary of Anne Frank when I was in the 8th grade. I felt sad and mad, and a strong connection to Anne Frank. I wanted to play her onstage. I started giving my diaries (journals) names, and I wrote from her inspiration. I believe her spirit lives on through every young person who ever dreamed of being a writer.
I remember watching my teacher come apart, wiping her eyes over and over after the performance ended. Although, I cried then, I wept now. I connected with the torturous grief of Anne’s father as he caressed the pages of Anne’s diary. Did he spend the rest of his life wondering What if we’d left sooner? Gone to America? Done it differently? A father, who wanted to protect his family, but couldn’t keep the evil away.
A presenter at a children’s literature conference once told me that when she was a child she found the Holocaust unjust and horrible. As a parent, she finds it unacceptable. I agree. It was all I could do not to fall apart, sitting amongst those uncomfortable 8th graders. One girl walked out next to me and said, “I hate crying. It was like being at a funeral.” Indeed, a memorial to all the lost lives and what they would have been, if only… 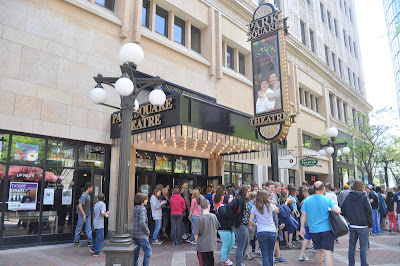 Then, we were free to go, back on the bus, back up north, to track practice, baseball, video games and carefree living, on this gorgeous sunny day.

Today, we learned that a legend in children’s literature passed away. Maurice Sendak colored our world with his Wild imagination. Born in 1928 and raised in Brooklyn, Sendak said he remembered the tears shed by his Jewish-Polish immigrant parents as they’d get news of atrocities and the deaths of relatives and friends. “My childhood was about thinking about the kids over there (in Europe). My burden is living for those who didn’t,” he told the AP. from The Huffington Post, May 8, 2012.

Journaling Prompt:  Write about a class fieldtrip, as a student, or as an adult.

What Could This Be?