Of Mice and Men Review

Quote of the Day:  John Steinbeck was born in Salinas, California, in 1902. His first three books were financial failures, and he worked at various kinds of jobs to surive, including fruit picking. – from the “About the Author” at the back of my yellowed copy of Of Mice and Men, which was in its 72nd printing when I bought my copy for a college course 25 years ago.  The story is still powerful and relevant today. With three failed books, and who knows how many rejections, and working at hard labor, unfulfilling jobs, do you think he ever felt like his dreams were as hopeless and unattainable and George and Lenny’s?

I watched the show with my 13-year-old son, Zach. I had a ticket for my oldest son Bobby, but he wasn’t feeling well so didn’t attend. He was the first one I thought of bringing when I saw the advertisement. He’s a senior in high school. He’s read the book. He’s ready for these heavy themes and dark look at life. I decided my 11-year-old twins weren’t ready. When I told them a little about the play, that it ends sad, that it’s a tragedy, they said, “We like shows where the good guys win.”

So, I found myself sitting next to my 8th grader, wondering how he was handling the content and emotional impact of this story. He told me afterwards that watching a play is way more intense than watching a movie. You’re right there. When the actors’ voices get louder, you can hear that. When they get emotional, you can feel that. While the movie makers might try to manipulate the volume, it’s not the same as being in the same room with the actors.

Wow. My work here is done. That’s exactly what I want him to know about live performances. I want my sons to know that there is life beyond the screen. That to be in the presence of gifted and emotional performers is more powerful than anything they’ll experience. Zach and I agreed, the screen creates a barrier. We have an easier time telling ourselves that it’s not real.  Even though the set is representative of the time and place and the actors are playing parts, it becomes real through their words, actions, reactions, their very breath…and ours, the audience. The actors I spoke with on Monday said that each show is different. It takes on a life of its own. Each time they perform, it’s a little different. The audience has a different chemistry. A Tuesday night performance in Brainerd, MN is going to feel different from a Friday night performance in Nothern California. I wonder how the folks in California react to this play?

Marcus, who played Crooks with amazing depth, told me that their director Jason King Jones wanted their performance of Of Mice and Men to be unlike any the audience has seen before. And it was. I believe it’s because he allowed himself as a director to interpret the play, to bring it to life as he sees it. Then, he got out of the way and allowed the actors to create their characters. I felt like the actors and their characters were one.

As Eryn O’Sullivan, Curley’s Wife, was talking about leaving this place and joining the traveling show, I couldn’t help but think of how all these young actors did just that. They left the comfort of home, of a “regular” life and hit the road in a traveling show. Aren’t they also beating it from one town to the next, looking for work, seeking connection, discovering more and more about themselves, and wondering if they dare to dream of something more?

And, that is the theme of the play. Zach asked me what I thought the theme was. I hesitated. I thought I’d lost my English teacher eye for literary elements. But, when he asked me, I was still in shock over the ending. Of course, I knew what was coming. I’ve seen this play done a couple time, read the book, studied the story, but I couldn’t answer that the theme was the death of a dream.  I wanted it to be more hopeful than that.

I asked Zach, “Why do you think John Steinbeck wrote this story?” He said, “Because he wanted to show how hard some people had it, especially during those times.”

I have such a smart son.

I am feeling grateful for the experience of the theatre, the improv class, the emotional and powerful performance by The National Players, and a great night out with my son, who sheds light on life and literature for me. 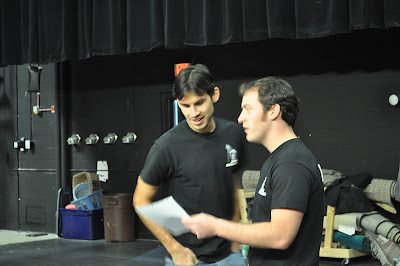 (Brian Vaughan who played Slim, and Patrick Hogan, as Carlson)
Go ahead, Play off the Page!
I dare you!

Close the screens, and experience life and art in real time. It’s waiting for you to show up with your own creative energy.