Hickory, dickory dock,
The mouse ran up the clock.
The clock struck one,
The mouse ran down,
Hickory, dickory dock.﻿
Those sneaky, little devils will go anywhere!  We’ve discovered mice and evidence of mice in interesting places.  If you live in and around woods, lakes, fields, the countryside, grass, and the corn is off the fields, and the temps. drop below freezing, you’ll get univited guests.  I have boys and a cat named Matilda, but they’re more prone to sitting around reading books, or hanging out on the piano bench than out hunting mice. 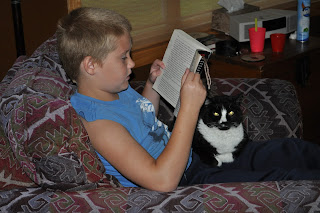 Get up!  Didn’t you hear that scratching sound in the vents? 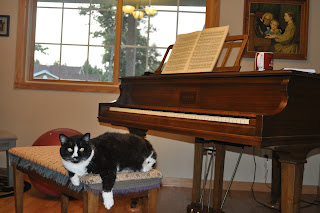 Oh, I know, Matilda, I’d rather be on the piano bench, too.
Matilda likes mice.  She plays with them by tossing them in the air and chasing them around, maybe giving them a few love taps until they’re all played out and run under the couch for a rest.  The rest can turn into a nap they never wake up from.  Then the living room stinks, so I move the couch to vacuum, and WHOA! get a nasty surprise. 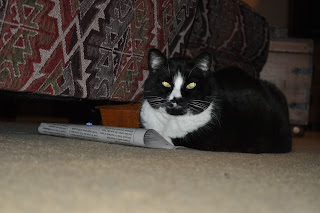 Looks like Miss Matilda is reading the paper and waiting, waiting…
We’ve had surprises in the bathtub overflow drain (yes!) and most recently suspicious evidence in the van.

A few years back, when Zach was in the tub (around 8 years old), he called me in because he saw something sticking out of the overflow drain.  It was a tail!  Then, a small paw!  I ran out of the bathroom with a shreek!  In the morning, the dad was trying to get rid of the mouse and asked for a tool.  I grabbed the spatula.  The twins were about six-years-old then.  They saw me head upstairs with the spatula and asked if breakfast was ready.  “Not, yet,” I said, spatula raised and ready.  “Dad has to kill a mouse first.”  They responded, “We’re having mice for breakfast?” 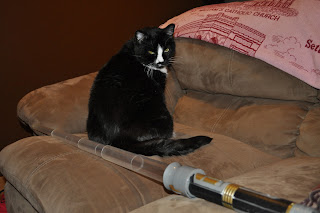 So, when I saw evidence of tiny creatures in the van – ripped up kleenex box and suspicious droppings, I freaked out!  I thought, if a mouse runs out while I’m driving, I’m going to crash.  I looked at the tools I had for this battle – a lightsaber and a cat.  Matilda gave me a one-eyed stare and fell back asleep, so I grabbed the lightsaber, opened all the doors to the van, and poked around in there.  Jab, then – paschew! the lightsaber lit up and made a loud noise.  I jumped.  I jabbed again.  It exploded with a new color and more sound.  I scared myself.  The mouse was probably tucked up under the engine at this point, laughing at me.

It might be gone.  I’m ready to take drastic measures.  I am NOT a mouse taxi.  No way.  No free rides from this chicken, or should I say elephant.  My boys said, “Mom, you’re like an elephant.”  Hmm, not so sure I like that comparison.  “No, it’s because you’re afraid of a tiny, little mouse.”

Go. Create. Inspire!  (then, come over here and help me fight the mice…please.)

No one said it would be Easy