Two Quotes for Today: What would life be if we had no courage to attempt anything? – Vincent Van Gogh (Dutch Painter)

If we are always arriving and departing, it is also true that we are eternally anchored.  One’s destination is never a place, but rather a new way of looking at things. Henry Miller (American Writer) 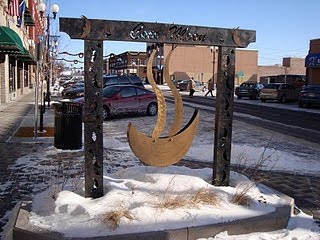 Art by JeMA hung here in February.
Some day soon,
Coffee Shop Confessions
at
The Coco Moon
by
Mary Aalgaard
will be performed.
I have not had the energy to work on my historical novel, War is Not for Girls.  I spent some time this weekend assessing my lack of creativity.  I had lunch with the above mentioned JeMA.  I told her that it’s not that I don’t like the story.  I do.  I love the characters.  They’re alive in my head.  The setting is real, but I wasn’t making any effort to work on it.
I started talking about an idea I’ve had for about a year to write a play set in a coffee shop.  I want to use all the great conversations I’ve had (and listened to at other tables) and bring them to life.
She said, “What is it you like about playwriting that’s different from novels?”
I said, “The script is pliable.  You are part of a creative team.  It starts with my ideas, the characters and story that I create.  Then, the director interprets the script.  The actors bring the characters to life, and it’s all presented to the audience who experiences the drama.”
She held up two books, “Would you rather read this one, Writing the Breakout Novel, or this notebook (either symbol of you starting your script or writing a play)?”
I pointed to the notebook.
I started writing the play right there.  The next day I went to the coffee shop and wrote some more.  This morning, we were in the Coco Moon where her art had hung, and I talked to the owner who welcomed the idea of performing the play.  She gave me some ideas for the script.
Folks, I have new energy!  I can’t wait to write more.
The novel is going back in the crockpot to stew for a while.  When the time is right, I’ll open the lid again and add some spice.  For now, I’ve got something fresh brewing!  I’ll introduce you to my characters later this week.
Ah, that hits the spot.
Journaling Prompt:  Describe a time when you abandoned one project because a new idea just couldn’t wait.

Piece of the Puzzle